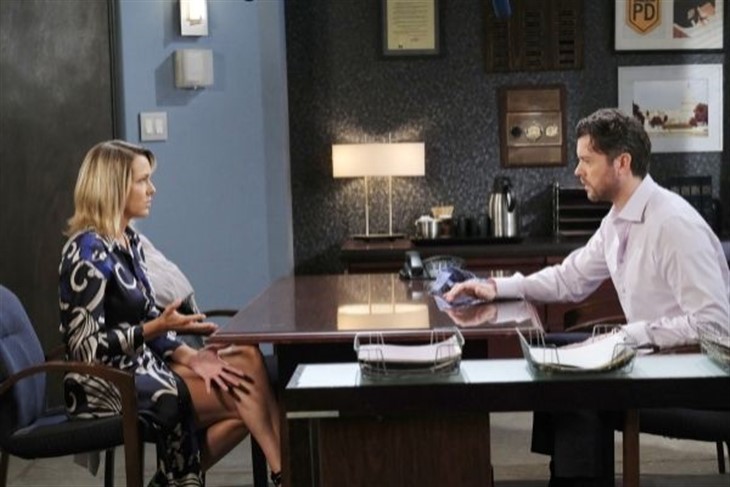 Days of Our Lives spoilers tease that irritated Nicole Walker (Arianne Zucker) will find out that EJ DiMera (Dan Feurreriegel) wants Sami DiMera, (Alison Sweeney) not her, in an upcoming episode of Days of Our Lives!

Days Of Our Lives Spoilers – EJ DiMera And Sami Brady Reconcile, But Not For Long

EJ and Sami reconciled, but it likely won’t be for long. It was revealed in a recent Days of Our Lives episode that Lucas Horton (Bryan Datillo) was the one who kidnapped Sami and held her captive for several months, but he’ll frame EJ for the kidnapping and that will drive Sami away from EJ and back to Lucas – eventually, and probably also temporarily!

But Sami does agree to listen to EJ’s side of the story about the kidnapping and apparently gives him the benefit of the doubt, if only temporarily. But Nicole won’t know anything about Lucas framing EJ for Sami’s kidnapping, as no one will if at all, for a while. All Nicole knows is Eric Brady (Greg Vaughan) came to visit her, and he’s returned to the priesthood against all odds, so there’s no hope for her there. She again goes to EJ to tell him her divorce from Eric will soon be final, and she’s blindsided and irritated when EJ tells her he’s back with Sami!

DOOL Spoilers – Why, EJ DiMera, Why?!

Days of Our Lives spoilers show Nicole will demand some answers from EJ, and she’ll want to know why he wants Sami and not her! Is he a glutton for punishment? She’ll give him a laundry list of reasons why he shouldn’t stay with Sami and how many times she’s cheated on him, probably as many reasons as Lucas has given Sami for not staying with EJ!

Days of Our Lives viewers know that Nicole seems to not be able to be with a man, at least not for the time being. Eric would have tried to work things out with her a year ago, but now she beats herself mentally for rebuffing him and now there’s no hope. Nicole is in a bad way and EJ wanting Sami over her is now adding insult to injury!

According to DOOL spoilers, EJ is not going to have a lot of patience for Nicole’s demands, and he may even apologize for upsetting her but will set her straight that just because they rolled in the hay a couple of times it wasn’t his intention to get back with her permanently! Nicole’s going to feel led on and she won’t be happy!

Days of Our Lives updates and spoilers hint Nicole will remain angry at EJ, but she realizes her accusations of him leading her on and deceiving her won’t hold much weight with him! EJ is not someone who even apologizes easily, although Days of Our Lives viewers can probably see that his mother Susan Banks (Stacy Haiduk) was a big part of EJ’s change of heart towards Sami!

Maybe he even feels a little guilty down deep inside, considering that Sami put up with his being a jerk for so much of his recovery, with her having stayed with him through thick and thin. Yes, his pride was hurt when Sami cheated with Lucas, but she still wants him, even though Nicole cannot understand for the life of her why he wants Sami! Nicole will likely leave from EJ in a huff, after telling him he’s made his bed with Sami and he’s going to have to lie in it with her, because Nicole never will again!