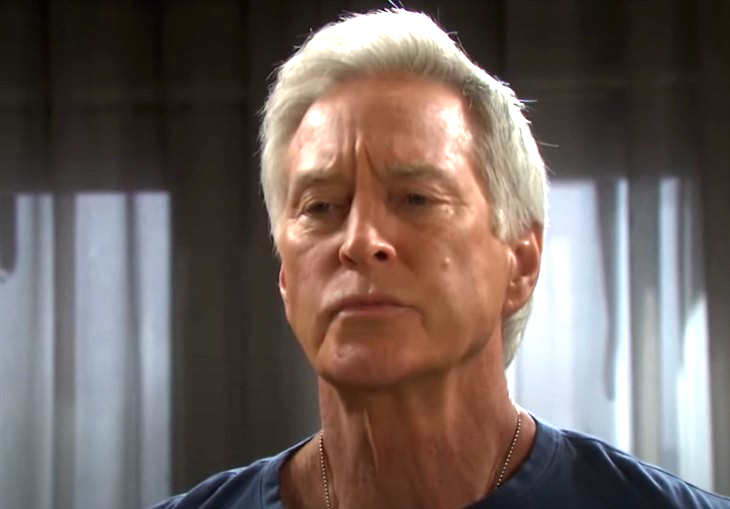 DOOL spoilers reveal that John is determined to find Marlena. Now that nearly everyone knows that Marlena is possessed by the devil, there’s no time to waste. Each minute that the devil remains in Marlena, the more damage that is done to people’s lives. Plus, the devil’s main focus is Ben and Ciara’s baby. The devil doesn’t want to be exorcised before that baby is born, which is several months from now.

Even though many people in Salem know the truth about Marlena, there are two people who remain clueless. Of course, we are talking about Ben and Ciara. Marlena knows that they will eventually find out unless she can find a way to prevent them from communicating with anyone. Marlena does this by urging “CIN” to flee Salem with her.

The excuse she uses is that John “abuses” her and with his connections to the ISA, her life is in danger. Ben will immediately believe Marlena because of his own history of being abused. Plus, he has no reason to doubt Marlena as she’s never lied to him before. However, Ciara needs more convincing, so the devil shows her “proof.”

Days Of Our Lives Spoilers – Joining Forces with Paulina Price

Days of Our Lives spoilers reveal that John and Paulina will compare notes about Marlena. John knows what he experienced and observed. Paulina also had her own terrifying encounter with “MarDevil.” When Steve “Patch” Johnson (Stephen Nichols) learns that Marlena isn’t going anywhere until she accomplishes her true purpose, he will tell John. This makes John want to figure out what it is. Eventually, they could discover that the devil wants Ben and Ciara’s baby.

John has a lot of resources and connections that can help him track people who don’t want to be found. However, Paulina also has her way of locating individuals. After all, it was Paulina’s reward that led to Ciara being found when she was kidnapped by Ben. Even though everyone said that it was a bad idea and Ciara got her memories back before being found, Paulina proved she can track the untraceable.

So, Paulina might prove useful in being able to find out where Marlena took Ben and Ciara. However, the problem is getting Marlena somewhere safe so an exorcism can be performed on her. With Ciara being pregnant, that means figuring out how to get “CIN” out of harm’s way. If Paulina does help find “MarDevil” and save “CIN,” could this be her redemption story? We will have to keep watching the NBC soap to find out.