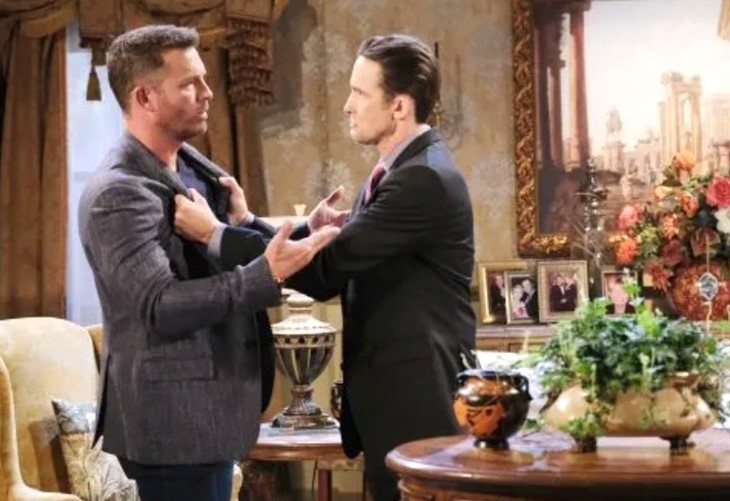 Days of Our Lives spoilers reveal that Philip Kiriakis (Jay Kenneth Johnson) is presumed dead and Brady Black (Eric Martsolf) is accused of murder. A lot of fans speculate that Philip fakes his death. However, what if both Brady and Philip are innocent victims in someone else’s scheme? Does Philip get taken by the same person holding Sami DiMera (Alison Sweeney)?

Days Of Our Lives Spoilers – Philip Kiriakis Dragged Away?

DOOL spoilers reveal that the winter promo shows a man being dragged away. Only the victim’s legs are shown, so there is no confirmation on who it is. However, the legs are not moving indicating that the man is either unconscious or dead. At the time the promo was released, it was believed it was a prison employee or Sami DiMera’s (Alison Sweeney) guard. However, new information suggests that it could be Philip.

The promo also reveals that Philip seems to go missing. When his prosthetic leg is discovered in the river, it is bagged into evidence. Eventually, Eli Grant (Lamon Archey) interrogates Brady about Philip’s disappearance. Then, Brady is arrested for Philip’s murder. Now, a fake leg and no body doesn’t indicicate murder. So, there must either be some other evidence that is uncovered or there is a witness who claims Brady attacked Philip.

Days of Our Lives spoilers reveal that Brady and Philip have been going to war over Chloe Lane (Nadia Bjorlin). Brady and Chloe slept in the same bed when their plane was grounded during a business trip. Even though nothing happened between them that night, Philip stormed into the hotel room and seeing them in bed together didn’t look good.

Later, Philip wrote a threatening email, which was never sent. However, Brady found out about it because of Jake DiMera (Brandon Barash) and Gabi Hernandez (Camila Banus). Then, there is Philip attacking Brady. Shortly after the violent altercation, Philip disappears. Everyone in Salem seems to think that Brady is guilty, even Chloe.

There seems to be someone who is kidnapping people in Salem. We already know Kristen DiMera (Stacy Haiduk) made Sarah Horton (Linsey Godfrey) disappear. However, that was months ago. So, the more recent kidnapping of Sami might not be connected. It’s possible that the same person who took Sami also kidnaps Philip. Then, they throw Philip’s leg into the river, but why? One reason is to throw the police off their trail or to intentionally frame Brady.

There is one person that could be responsible for both Sami and Philip disappearing. That person is Marlena Evans aka “MarDevil” (Deidre Hall). After all, the devil thought nothing of holding John Black (Drake Hogestyn) and Susan Banks (Stacy Haiduk) hostage. Plus, the guard told Sami that the puppetmaster wasn’t interested in money. So, that means there is another reason for the abduction. With it being teased that the devil possession story will get even crazier, who else could it be?