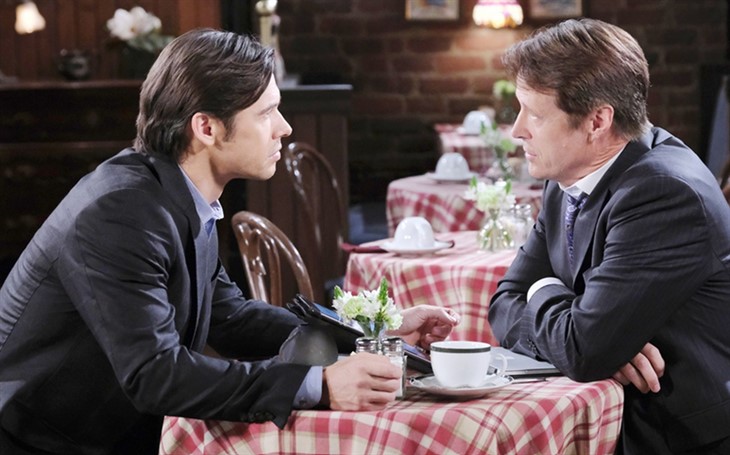 Days of Our Lives (DOOL) spoilers suggest that Xander Kiriakis (Paul Telfer) has been arrested again and has no place to live if he is released. Xander’s charges had been dropped until E.J. Dimera (Daniel Feuerriegel) had them reinstated. Will the truth come out soon?

Days Of Our Lives Spoilers – Gwen Rizczech Was Dealing Drugs

Days of Our Lives Gwen Rizczech (Emily O’Brien) was the one dealing drugs for Dr. Snyder (Michael Lowry). However, Xander took the blame for everything and Gwen gave Jack Deveraux (Matthew Ashford) the story she and Xander made up. However, Gwen was truthfully dealing drugs because she lied about her miscarriage.

Xander is the only other person who knows the whole truth now that Snyder is dead on Days of Our Lives. This truth could save Xander from these charges and Gwen happens to care about Xander a great deal. Will Gwen put her relationship with her father at risk to save Xander? Will Jack feel the need to make amends to Xander if he gets released?

Days of Our Lives Jack has already apologized to Xander. However, if the whole truth comes out, Jack may feel that he needs to do more. Jack and Xander were friends before Gwen came to town. Jack sided with Gwen and had Xander arrested. Jack was furious at Xander at first but recently chose to apologize to him.

Unfortunately, Xander needs more. Xander has no money because the police are holding the cash that he had. Xander owes that money to E.J. who had the charges reinstated. If Jack makes bail he will have nowhere to go. Will Jack feel obligated to invite him to move back into the Horton house?

Days Of Our Lives Spoilers – Jack Deveraux May Feel Guilty

Days of Our Lives spoilers tease Jack may feel guilty for having Xander arrested in the first place. Gwen and Xander are also sleeping together. Jack may not want to know what Gwen and Xander do in their private time, however, he doesn’t want his friend on the street either. Gwen could talk Jack into letting Xander move back into the house. Jack could offer to let him move in as well, especially when crazy things begin happening because of Doug Williams (Bill Hayes) and Marlena Evans’ (Deidre Hall) possession. Jack may feel that Xander could help protect Gwen from the evil person they believe is in town.

Whatever happens, Jack is very likely to have sympathy for Xander and offer him a place to stay. Will Jack move Xander back into the Horton house? How will Jack’s family take this if he does?