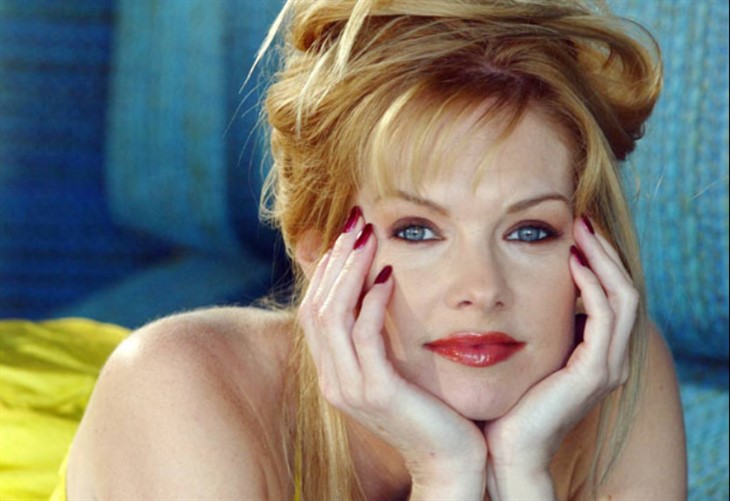 General Hospital spoilers and rumors tease that Cynthia Preston will return to General Hospital in upcoming episodes, and Faith Rosco will compete with the rest for Sonny Corinthos’ (Maurice Benard) territory!

General Hospital viewers will recall that the presumed dead Sonny, who lived for around a year in Nixon Falls, Pennsylvania as amnesiac “Mike” regained his memories in a recent episode of General Hospital. Sonny returns to Port Charles, but that doesn’t mean everything goes back to the way it was before he disappeared, at least not right away.

For one thing, his wife married his best friend and they took the place of Sonny, first Carly Corinthos (Laura Wright) on her own and then married to Jason Morgan (Steve Burton) as joint heads of the Corinthos crime family.

The other five families have been sparring for Sonny’s territory, in particular the Novaks and Charles Buscema (Bart Tangredi) who have been influenced by Cyrus Renault (Jeff Kober) pulling the strings from behind bars! The Novaks started, first by commandeering a shipment of Corinthos Coffee in New Jersey, then blew up a Corinthos warehouse in Port Charles. Before Sonny can take his place again, a lot that was done in his absence will have to be undone, and that will be no easy task!

Longtime General Hospital viewers will remember that Faith was a mob leader in her own right, and she, like Sonny, has also been presumed dead although much longer! She was shot by a hit man hired by AJ Quartermaine (Sean Kanan) back in 2005. Faith Rosco first arrived in Port Charles in late 2002 to take down rival mobster, Sonny who had killed her husband, played by Brian Fitzgerald. It wasn’t long before she partnered up with Ned Quartermaine (Wally Kurth), who blamed Sonny for the death of Kristina Cassadine (Jaime Ray Newman).

GH recaps reveal Kristina was Alexis Davis’ (Nancy Lee Grahn) younger sister, who her daughter Kristina Corinthos-Davis (Lexi Ainsworth) was named after. Ned tired of Faith quickly, and ended their partnership. She then found a new partner in Sonny’s new lawyer and half-brother Ric Lansing (Rick Hearst). But when Ric attempted to end his partnership with Faith, she did not want to let him go. It was Faith who pushed Elizabeth Webber, now Elizabeth Baldwin (Rebecca Herbst) down the stairs, causing her to miscarry her baby with Ric.

General Hospital spoilers and rumors tease that Faith will reappear in Port Charles alive, to fight for rights to Sonny’s territory along with the rest of the Five Families. It is possible that she may be in league with one of the families or perhaps working with Cyrus Renault (Jeff Kober). General Hospital viewers will remember that Cyrus was able to find out a lot of things about a lot of people, and he may find Faith alive somewhere.

Faith could have been in a coma and in the same facility as Cyrus’ mother and he may find out she has awakened that way. Cyrus has long arms so to speak, as General Hospital viewers know, that can reach out from behind the bars of his federal prison in the Midwest which supposedly was secure. However, he ran a whole drug network from behind bars for years while imprisoned in the Northwest, and ran drugs from Pentonville before he was released. It’s a good bet that Cyrus makes Faith his representative on the outside and they are in a partnership when she shows up!