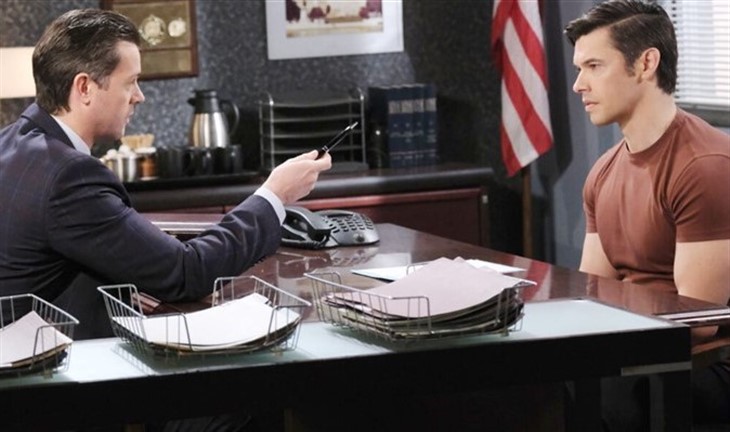 Days of Our Lives spoilers reveal that EJ DiMera (Dan Feuerriegel) wants to take Xander Cook’s (Paul Telfer) criminal case. In exchange, Xander must give EJ the $1 million bribe that Sami DiMera (Alison Sweeney) paid out. Xander feels backed into a corner but that will change during the week of August 30. EJ will be surprised to discover that Xander isn’t easily controlled.

DOOL spoilers reveal that EJ went to visit Xander, who was arrested by Shawn Brady (Brandon Beemer). Xander was being held in an interrogation room and was surprised to see EJ walk in the door. The man was interested in making a deal with the defendant, as we previously speculated. EJ will take his case and get rid of the criminal charges. In exchange, he wants the $1 million that Sami paid Xander to expose Nicole Walker’s (Arianne Zucker) one-night stand.

Even though Xander doesn’t want to give the money to EJ, he was backed into a corner. Xander wants the criminal charges to disappear and to have his freedom back. He ended up taking EJ up on his offer. However, this isn’t the end of the story. EJ might be able to coerce everyone else into doing what he wants, but Xander refuses to be one of them.

Days of Our Lives spoilers for the week of August 30 reveal that Xander will play hardball with EJ. We imagine that Xander might hear about Sami’s sudden disappearance. When EJ walked into the police station, he called Sami his “b**ch of a wife.” It won’t take Xander long to suspect that EJ might have made Sami disappear.

Fans may recall that EJ sent some text messages around the same time that “Sami” texted Allie Horton (Lindsay Arnold) and Marlena Evans (Deidre Hall). Xander is sly and crafty, so he will likely figure out the truth. Xander just might call EJ out on making Sami disappear and threaten to expose him.

EJ is so used to being able to manipulate, coerce and control everyone in his life. However, things have changed a lot in Salem over the years. Xander might not have any money. In fact, he doesn’t even have a job or a home right now. One thing that Xander does know how to do is turn the tables. Has EJ finally met his match and when he locks horns with Xander, which man will come out on top? We will have to keep watching the NBC soap to find out what happens with this storyline.