Days Of Our Lives Spoilers: The Devil Wants Abigail DiMera! 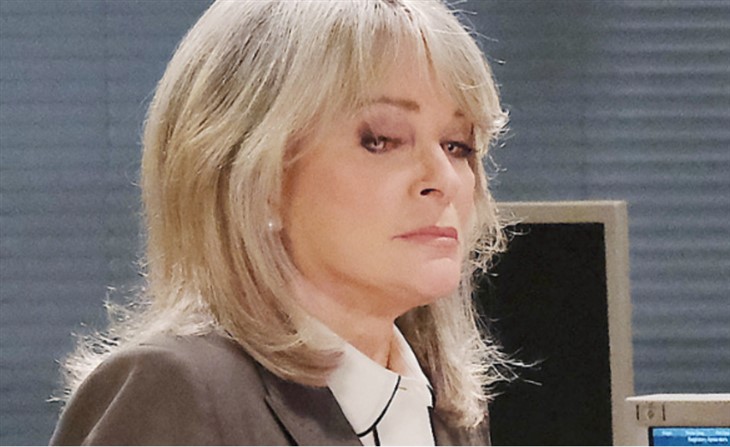 Days of Our Lives Spoilers tease that right now, Dr. Marlena Evans (Deidre Hall) is in a battle with the devil for her soul, but he might very soon decide that it’s time to move on. As viewers know, Johnny DiMera (Carson Boatman) is planning on making a movie based on Marlena’s original possession 25 years ago. To that end, he has enlisted Abigail DiMera (Marci Miller) to play Marlena in the film. This may just entice the devil to leave Marlena once and for all.

Days Of Our Lives Spoilers – Dr. Marlena Evans May Just Be The Means To An End

The devil started his new campaign of evil by possessing poor Doug Williams (Bill Hayes). Doug was just taken as a way to get to Marlena. But the devil knows that Marlena has many loved ones, and he failed once before when the power of John Black (Drake Hogestyn) and Marlena’s love sent him out of Marlena, seemingly for good. He may not be willing to chance such a thing happening again. But when he witnesses Abigail playing “Marlena” she might just be a better option.

DOOL Spoilers – Abigail DiMera Has Been Through So Much Already!

Abigail has a history of mental illness, and suffered from DID for a time. Her personality was fractured, and although she recovered that doesn’t mean her troubles are over. Perhaps playing the role of another person brings the DID back, but this time she believes herself to be the real Marlena. The devil could easily take advantage of Abigail’s confusion and take her over instead. And with all the problems between Chad DiMera (Billy Flynn) and Abigail, he may believe that true love won’t be a factor in stopping him. But he may not realize just how much Chad and Abigail mean to one another.

Days Of Our Lives Spoilers – Chad DiMera Will Move Heaven And Earth To Save Abigail DiMera!

But Chad love Abigail just as much as John loves Marlena. It’s true that they have had their share of difficult times, but the problem has never been the love they have for each other. If the devil thinks he will have an easier time possessing Abigail than he has Marlena, he will be in for quite a shock!

Is Marlena the devil’s endgame? Or could he be targeting someone else, like Abigail? Could Abby’s DID resurface causing her to believe she is actually Marlena? And is she the devil’s real target? Literally anything can happen in Salem, so stay tuned to Days of Our Lives airing weekdays on NBC. And don’t forget to check back right here regularly for all your Days of Our Lives news, information and spoilers!

My Big Fat Fabulous Life: Was It Love That Whitney Found In Paris This Time?