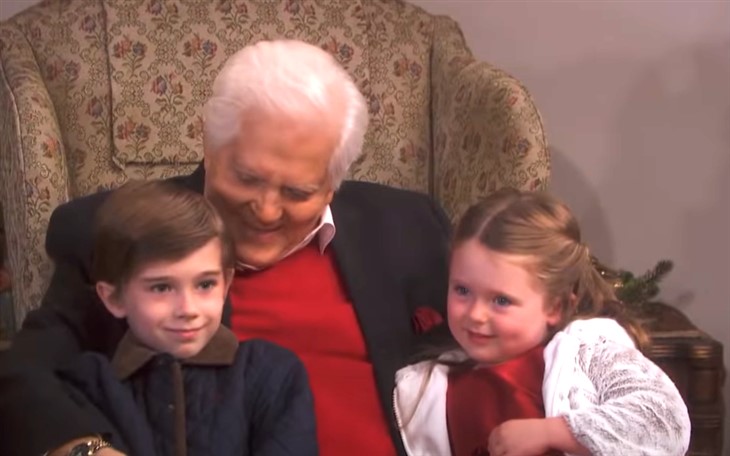 Days of Our Lives spoilers reveal that the winter preview teases a lot of shocking scenes, including a decapitated bear and murder mystery. However, there are also some happy moments. One of those is Doug Williams (Bill Hayes) bonding with the “Chabby” kids, Thomas DiMera (Christopher Cary) and Charlotte DiMera (last played by Olivia and Oakley Rondou).

DOOL spoilers reveal that Julie Williams (Susan Seaforth Hayes) hired Belle Brady (Martha Madison) to sue Marlena Evans (Deidre Hall). Julie and Belle won, which allowed Doug to come home from Bayview. However, the drama with that storyline isn’t over yet. “MarDevil” tries to drag Doug back to Bayview but Julie will not allow it.

In the winter preview, Doug points his finger at Marlena and announces she is the devil. Marlena tries to play it off as if Doug is crazy and for a few moments, it seems as if everyone believes the possessed psychiatrist. However, in another scene in the winter preview, the devil exposes its own power. That is when everyone realizes what has been going on and that there is absolutely nothing wrong with Doug.

Marlena will try to be saved by John Black (Drake Hogestyn) and Father Eric Brady (Greg Vaughan). It will be the ultimate battle between good and evil. Plus, a mysterious hiker, which could be Gabriel the Archangel in human form, tries to save Ben Weston (Robert Scott Wilson) and Ciara Brady Weston’s (Victoria Konefal) baby.

Days of Our Lives spoilers reveal that it’s a very Horton Christmas as festivities get underway. Jennifer Horton (Melissa Reeves) returns from Boston and comes bearing gifts. Jennifer excitedly runs to Julie and embraces her. Chad DiMera (Billy Flynn) and Abigail DiMera (Marci Miller) finally put the past behind them and are truly united as a couple in the winter preview.

A heartwarming and long overdue scene in the winter preview features Doug. Surrounded by Christmas decorations, Doug is sitting in his chair. There are two adorable children on his lap, which are the “Chabby” children: Thomas and Charlotte. Doug is looking down at them with his face beaming with joy and pride. It is a heartwarming scene that will tug at viewers’ heartstrings after Doug’s harrowing experience with “MarDevil.”

What do you think of the possession storyline coming to an explosive end around Christmas? Have you checked out the winter preview yet and if so, what is the scene you are looking forward to seeing the most? Are you glad that Doug gets a heartwarming moment with Thomas and Charlotte? Let us know your opinion and remember to keep watching the NBC soap to find out what happens next.