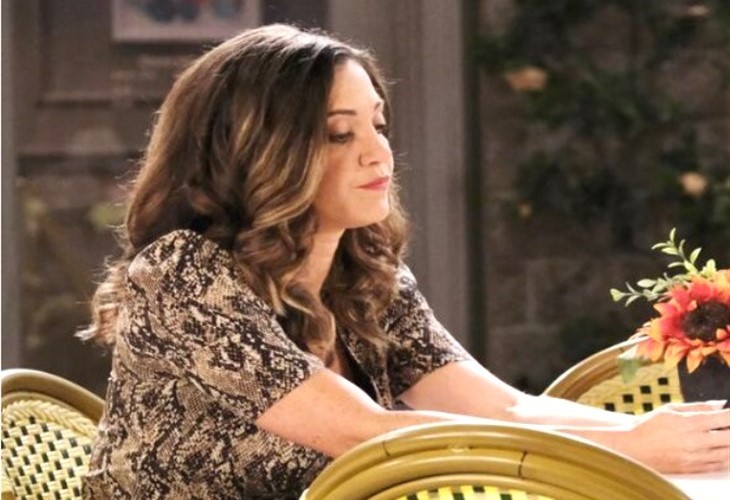 Days of Our Lives spoilers and rumors tease that Jan Spears (Heather Lindell) could be taking a page from Kristen DiMera’s (Stacy Haiduk) playbook and disguising herself as Belle Brady (Martha Madison) to steal Shawn Brady (Brandon Beemer) in a future episode of Days of Our Lives!

Days Of Our Lives Spoilers And Rumors – Two Belle Bradys?

The Days of Our Lives winter preview shows two Belle Bradys, as one is in bed with Shawn and the other walks into their bedroom! Each Belle asks who the other one is! Shawn, obviously is confused – did he just cheat on his wife – with his wife? True, Jan is a bit taller and skinnier than Belle – but, Kristen and Sarah Horton, (Linsey Godfrey) Kristen and Nicole Walker, (Arianne Zucker) and Kristen and Kate DiMera (Lauren Koslow) were different heights and body types as well!

No one seemed to notice that, for some strange reason, and Kristen was able to get away with all of those disguises and impersonations! The big question is for Days of Our Lives viewers – what other explanation could there be for two Belles, and who else besides Jan Spears would go to that length to steal Belle’s husband?! Dr. Wilhelm Rolf (William Utay) is still in prison, and why would he be cloning Belle Brady to begin with? There would be no reason!

Days of Our Lives viewers will recall that the last time Jan was seen, she was involved in a convoluted scheme where she had stolen a car with Chloe Lane (Nadia Bjorlin) in the trunk and kidnapped Claire Brady (Olivia Durant). She also had killed Charlie Dale (Mike C. Manning) in an attempt to frame Belle for his murder! Days of Our Lives viewers will recall that previously, Jan had been in a coma after John Black (Drake Hogestyn) had hit her in the head, she later continued to fake her coma so she could go and come as she pleased, which was also her alibi for killing Charlie.

But the jig was up again for Jan, as she held Chloe and Claire hostage in a cabin in the woods – she let Chloe go and left Claire in the cabin, but Philip Kiriakis (Jay Kenneth Johnson) and Chloe got into an altercation with Jan, and once again she was rendered comatose and hauled away. She has been in a prison infirmary ever since – as far as anyone knows! Days of Our Lives viewers would not put anything past the conniving and evil Jan!

Days of Our Lives viewers will recall that when Brady Black (Eric Martsolf) fell in love with Kristen, she was impersonating Nicole! All that time Brady spent in bed with the woman he thought was Nicole, the bond became closer and closer and Kristen as Nicole had become pregnant. In fact, Kristen was going to have Rolf steal Sarah Horton’s embryo and transplant it in her but Rolf told her she was already pregnant! This of course came from those times in bed with Brady when she was impersonating Nicole-which she did because she was convinced he’d never love her for himself, so she “became” someone she knew he would love!

Days of Our Lives viewers know Jan is every bit as desperate as Kristen was, and knows Shawn will never love her for herself, so she takes a page from Kristen’s playbook, fakes her coma, somehow disguises herself with a lifelike mask and with an improvement, is able to completely mimic Belle’s body as well as her face! This will be how she convinces Shawn that she’s really Belle – and then after the real Belle walks in on them, it will be the battle of the Belles over Brady!