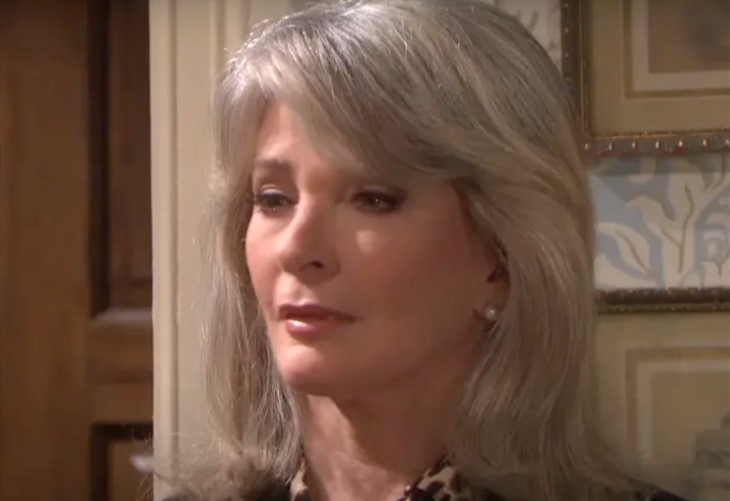 Days of Our Lives (DOOL) spoilers for Monday, November 29, 2021, reveal MarDevil delivering up some creepiness for Ben and Ciara as John Black desperately searches for his wife.

Days Of Our Lives Spoilers – MarDevil Terrorizes The Town

Now that MarDevil (Deidre Hall) has been outed to most of Salem, she needs an escape plan. She can’t somehow go back to hell without completing her mission and making sure Ben (Robert Scott Wilson) and Ciara Weston (Victoria Konefal) bear her Satan’s seed. To that end, she visits the oblivious pair and suggests they all run away together.

MarDevil has her reasons for getting Ben and Ciara out of town and fast and they are not sure what to do. After all, Marlena hasn’t been making much sense or acting quite like herself for a while now. Sure, the real Marlena acts as a mother to Ben, but this Marlena is so much different. Still, the idea that Marlena could be possessed by the devil is so foreign to them that they just might leave town with MarDevil after all. What a strange pregnancy Ciara will have if so….

Philip Kiriakis (Jay Kenneth Johnson) has spent much of the year sabotaging his own romance with Chloe Lane (Nadia Bjorlin) as he’s been possessive and controlling while seething with jealousy. He’s accused Chloe of having an affair with Brady Black (Drake Hogestyn) so many times now, it’s been ridiculous and now he is sure he’s been right all along. His jealousy also gets him to do a crazy thing this time — and yes, he’s been crazy but this is crazier than ever and can have life-changing consequences.

Meanwhile, Brady wants Chloe just as much as Philip but at least he’s being rational about it. And that is quite a feat for Brady, who falls in love way too fast and is rarely rational about it. Even Maggie Kiriakis (Suzanne Rogers) isn’t too thrilled with what she’s been seeing from Philip, so she tries to advise Brady on the best way to win Chloe’s heart. Will Maggie be the key to Brady and Chloe being together? Stay tuned to Days of Our Lives weekdays to see how these stories play out.