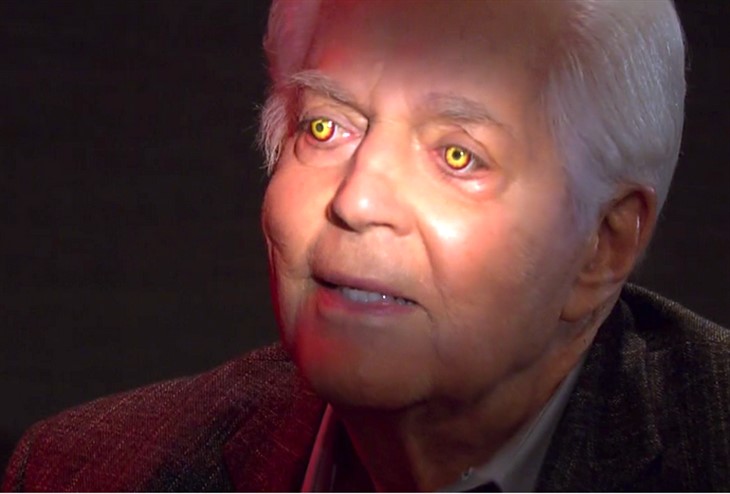 Days of Our Lives (DOOL) spoilers for Tuesday, September 21, 2021, reveal in Salem Devil Doug wreaking havoc at the hospital. Is he ready to take over Marlena and leave Julie’s dear husband alone?

Days Of Our Lives Spoilers – The Devil Made Him Do It?

Marlena Evans (Deidre Hall) spent Monday first not believing the devil was using Doug Williams (Billy Hayes)as a conduit and then trying to reason with him to just leave her, Doug, and Salem alone. When he did that light trick, she had to admit this was her old pal Lucifer again. We’re not sure what she thought she could accomplish using her psychiatry skills on a demon, but she sure did try.

However, Devil Doug is about to get a lot more aggressive on Tuesday. He’s come for Marlena and made that clear. Is he ready to possess Marlena once again and leave Doug alone? How will Doug’s body even survive this? Things are about to get stranger in Salem than ever… At least Julie Williams (Susan Seaforth Hayes) is carrying around her rosary beads. We’re sure they can help…maybe?

Allie Horton (Lindsey Arnold) and Johnny DiMera (Carson Boatman) couldn’t believe their eyes when they read over Will Horton’s script and realized their Grandma Marlena had once been MarDevil, possessed by Satan himself way, way back in the ancient times of the 1990s. Johnny needs to investigate this some more, so he turns to John Black (Drake Hogestyn) to see if it’s all true and John has to confirm that it indeed was.

Little do they know what’s going on in Salem now. Allie is quite nervous about it all and for good reason but she’s also picking John’s brain.

Days Of Our Lives Spoilers – Paulina Price Has A Big Ask

Paulina (Jackee Harry) is keeping a huge secret that only Marlena and her mother, Olivia (Marla Gibbs), know, but Marlena having this secret also means the Devil will also soon know. That doesn’t mean Paulina doesn’t need Lani’s (Sal Stowers) blessing for something in her life. We think it’s a safe bet that something is a someone and that someone is Abe Carver (James Reynolds), the man Lani still thinks is her father. Stay tuned to Days of Our Lives weekdays to see how these stories play out.