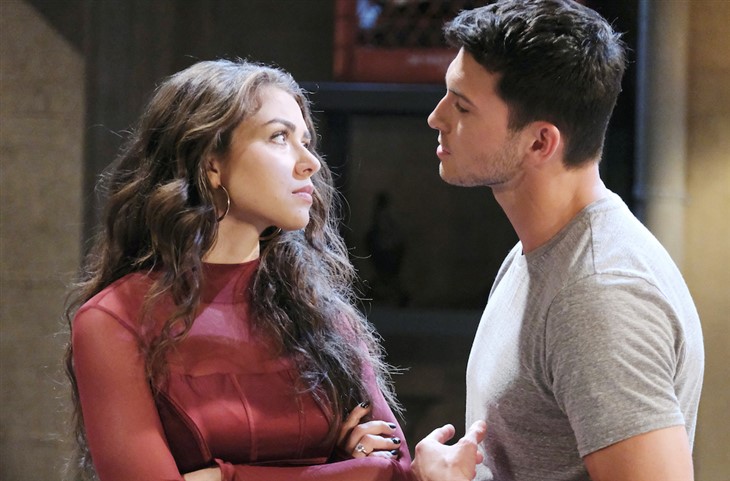 Days of Our Lives spoilers reveal that Ciara Brady (Victoria Konefal) is trying a bit too hard to anger Ben Weston (Robert Scott Wilson). She’s doing everything to not just move on, but to actually push him away. It seems as if this goes beyond her just not remembering him. Could she be doing this and faking her amnesia in order to save his life from an unseen villain?

DOOL spoilers reveal that Ciara is said to have no memory of the last three years. However, she seems to remember certain things that simply don’t make sense. Even if Theo Carver (Cameron Johnson) and Hope Brady (Kristian Alfonso) told her about being held hostage, they wouldn’t know all the details. Only Ciara would know everything that happened during that time in captivity, which she apparently can’t remember.

She also mentioned to Allie Horton (Lindsay Arnold) how big Henry Horton (Jayna and Kinsley Fox) has gotten. Now, maybe she visited Henry off-screen, but a lot of viewers are wondering exactly how she would know he’s gotten so big. There are just a lot of little inconsistencies that are making fans doubt Ciara’s amnesia story.

Ciara was pretty darn pushy about getting a divorce. When it was going to take longer than a day, she raced to get an annulment. That way she could marry Theo immediately. Why the big rush, though? It seems a bit forced, even for Ciara. A romantic at heart, she believes in true love and waiting for the right one. She may love Theo as a friend and the history they share, but she isn’t in love with him. There is a big difference. Plus, she is determined to marry Theo even though her own mother and other family members can’t be there? Something just doesn’t seem right.

Days of Our Lives spoilers reveal that Ciara claims she wants to move on with Theo. So, why marry him on the day of her wedding to Ben? That’s not “moving on,,” that’s a deliberate attempt to stab Ben in the heart. We don’t think it’s because she hates him, though. It’s as if she is intentionally trying to hurt Ben and push him away. There’s a good chance that Ciara is faking her amnesia. There is probably a good reason why she’s pushing Ben away and moving halfway around the world.

Ben has a lot of people that would do anything to see him suffer. He took lives during his Necktie Killer days. There are a lot of people that will never forget and certainly won’t forgive. Ciara’s life has been in danger before because of someone’s need to get vengeance on Ben. It is likely that Ciara can’t be with Ben without risking his life. So, perhaps Ciara is desperately trying to save his life. But the more he pushes, the closer he unknowingly comes to death. We will have to keep watching the NBC soap to see if this theory pans out. Let us know your thoughts on the “CIN” storyline.