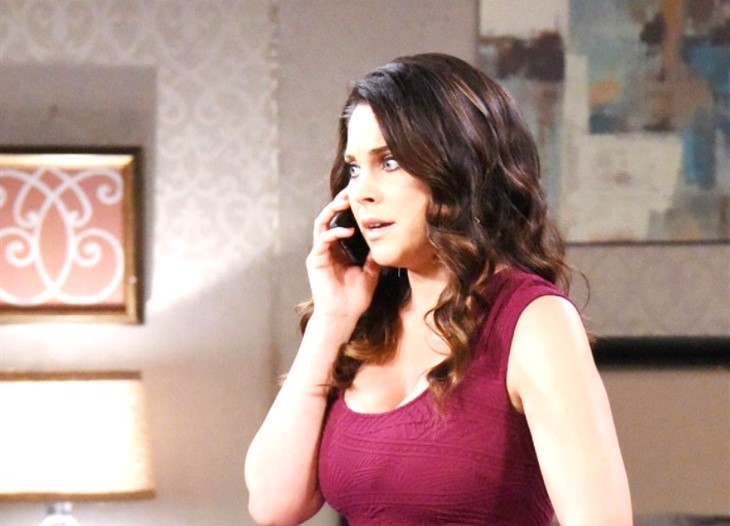 Days of Our Lives (DOOL) spoilers reveal that Chloe Lane (Nadia Bjorlin) has a bad feeling. Determined to help, she pressures Philip Kiriakis (Jay Kenneth Johnson) to tell her what’s really going on. However, he won’t give up any information. Then, Chloe just happens to hear a secret conversation that explains everything. What will she do with the information?

DOOL spoilers reveal that Chloe was happy to run into Philip. They are both actually in Salem at the same time. That hasn’t happened in many years. The two were supposed to rekindle their relationship after the Last Blast reunion, but Philip disappeared. He admitted to Chloe that he got in pretty deep with gambling and had to part easy with Mimi Lockhart (Farah Fath) as a result. But that is where he stopped talking and there is so much more to the story. Chloe can feel it and she’s worried that Philip’s in hot water.

During the week of January 4, Chloe will continue trying to get the full truth out of Philip. She knows how to pry information out of him. As he mentioned to her recently, he finds it impossible to say no to her. Even though he will be tempted to confide in Chloe about the mob, Ava Vitali (Tamara Braun), money laundering and Xander Cook Kiriakis (Paul Telfer), he won’t crack. The last thing he needs is Chloe to be in the line of fire if this arrangement doesn’t go as planned.

Days of Our Lives spoilers reveal that Chloe overhears Philip talking on the phone and she gets all the details on what’s going on. If Philip isn’t talking to Ava (because we don’t know if she will still be held hostage by her son or not), then someone else from the mob family might want answers. If Ava has no contact with her family, they will wonder if something happened to her. Ava was supposed to keep an eye on Philip and make sure everything went according to plan. So, they might think Philip did something to Ava, which can put him in even more hot water.

Chloe could do something with the information about Philip. She could turn to any member of the Kiraikis family. Should could even tell Victor Kiriakis (John Aniston), even though he can’t stand her. Philip is in too deep and working with the mob will just lead to prison or death. Instead of doing something to help, Chloe turns her attention toward Brady Black (Eric Martsolf).

But the mob isn’t far behind. It is teased that Xander finds out the truth and sets off a chain reaction that has deadly consequences.