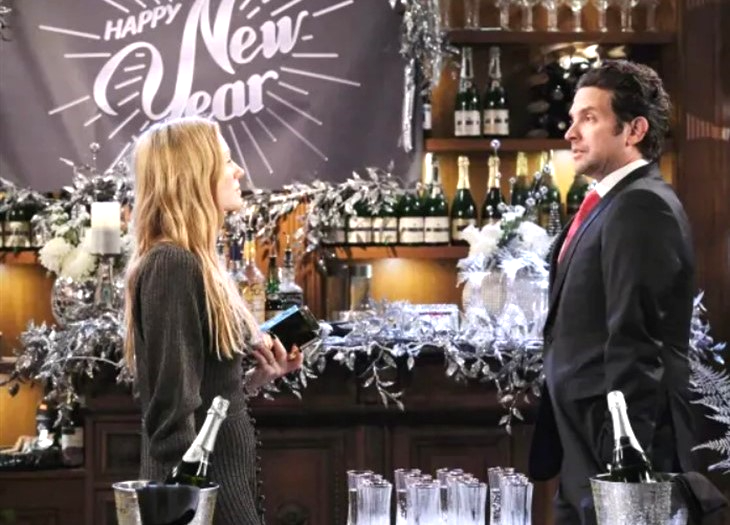 Days of Our Lives (DOOL) spoilers tease that in Salem Jake Lambert (Brandon Barash) will come clean with Abigail DiMera (Marci Miller) about his romance with Kate Roberts (Lauren Koslow) in an upcoming episode of Days of Our Lives!

Days of Our Lives viewers will recall that Chad DiMera (Billy Flynn) has been very suspicious lately. Two unrelated incidents, plus some plotting and prodding by Gwen Rizchech (Emily O’Brien) led him to believe that Jake and his wife Abigail were having an affair! Once he found Abigail’s scarf in Jake’s automotive garage. She had been there, but certainly not in bed with him. She just dropped her scarf while talking with him in a friendly manner.

Abigail thinks of him as any of her other in-laws, and since Jake is the late Stefan O. DiMera’s (Brandon Barash) twin, he is her husband’s half-brother. Another time they were both sitting on the couch in the DiMera living room and Abigail dozed off – Jake put a sofa pillow on his lap so her head wouldn’t be touching his body. Of course, jealous Chad failed to notice that detail! He even flat out accused Abigail of having an affair with Jake, which she got very upset about.

He admitted that seeing her with Jake brought back bad memories of when she was suffering from dissociative identity disorder and her alter, “Gabby” actually did have an affair with Stefan. Then there was Christmas Eve; Gwen mixed up the Christmas presents so that Abigail would receive an expensive necklace that Jake had bought for Kate Roberts! But that’s not as dirty as Gwen gets. She’s desperate to break up Chad and Abigail so she can have Chad to herself!

Days Of Our Lives (DOOL) Spoilers: Sarah Makes Another Attempt To Get The Goods On Philip

At the DiMera New Year Eve party, Jake and Abigail talk about Chad’s accusations. He admits that the necklace was a gift to Kate, and that they are involved romantically. He also talks about how vindictive and sneaky Gwen is, and doesn’t doubt that she mixed up the Christmas gifts on purpose.

He thinks that Gwen is still jealous over him and wanted Kate to think that he was cheating on her with Abigail! Days of Our Lives viewers know that in reality, it’s Chad that Gwen wants to think that Jake and Abigail are having an affair! Abigail’s a bit taken aback that Jake would go for someone almost old enough to be his grandmother, but there are a couple of other details Jake might not know about. Did he know Kate was once married to a couple of other DiMeras? She tells him she was married to his father, Stefano DiMera (Joseph Mascolo) and Stefano’s nephew Andre DiMera (Thaao Penghlis).

Jake remarks since he never knew either of the men or had a family relationship with them it doesn’t bother him. He just laughs and says he guesses he’s in good company! Besides, he says Kate is a very interesting and strong woman and he likes that about her. He wonders if maybe he could solve any problems with Chad by admitting to his romance with Kate. Abigail isn’t sure, but they leave the party together, maybe to go looking for Chad. Little do they know that Gwen is on the way with Chad on her arm!