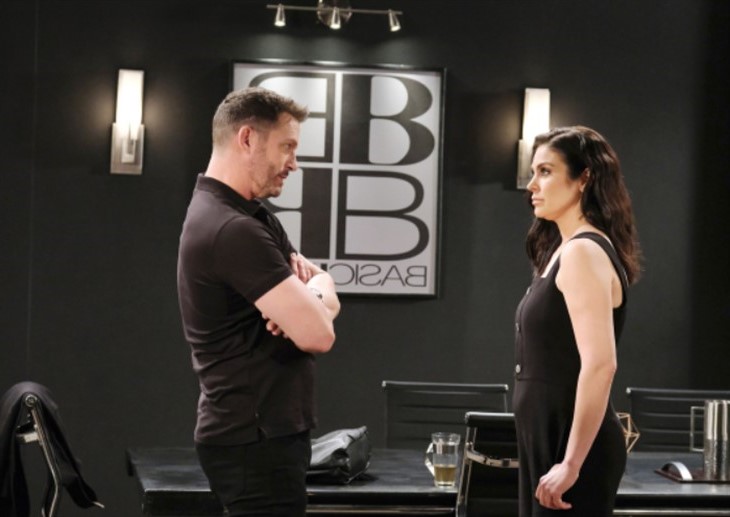 Days of Our Lives spoilers tease that Chloe Lane’s (Nadia Bjorlin) got a secret for Brady Black (Eric Martsolf) and she’ll reveal to him what it is in an upcoming episode of Days of Our Lives!

Days of Our Lives viewers will recall that Chloe has had it up to HERE with Philip Kiriakis’ (Jay Kenneth Johnson) controlling behavior and insecurities! No matter how she has tried, she could not get Philip to trust her – he was always convinced that Brady and she were cheating behind his back! She finally got fed up enough in a recent episode of Days of Our Lives that she moved out of the Kiriakis mansion. Brady had offered her to stay with him and Rachel Black (Finley Rose Slater) but she wasn’t quite ready to make that kind of a move because she hadn’t officially broken up with Philip yet. But viewers can tell that Chloe’s patience has nearly come to an end where Philip is concerned, and even though she wanted to see where it would go with him, she’s realizing that he hasn’t changed one little bit over the years!

Days of Our Lives viewers know that although Brady wasn’t quite ready to take MarDevil’s (Deidre Hall) salacious advice, he does have feelings for Chloe and suspects she still has feelings for him. Before she decided to give Philip another chance and Brady had broken up with Kristen DiMera (Stacy Haiduk) once and for all, they had admitted their romantic feelings for one another.

But at the time, Chloe was torn between her feelings for Brady and her feelings for Philip, and so she went with Philip again determined to make their relationship work this time. However, Philip stalked her and Brady every chance he got, and refused to trust her or believe her – and she recently moved out, although hadn’t officially broken up with him. Days of Our Lives viewers will see Brady and Chloe have a heart to heart talk soon about where they stand with each other, since Chloe has taken a little time away from Philip to decide what – and possibly who – she wants!

Days of Our Lives viewers will see that Chloe has a secret to tell Brady – all indications are that the secret is that she loves him too, and has decided to give their love another try! Days of Our Lives viewers could see it was pretty obvious that Chloe and Philip were not going to work out because of his jealousy and distrust, and indeed, no relationship can survive that kind of thing. There has to be trust between partners, and when there is not, the relationship implodes from the inside out.

Philip has proven he not only cannot trust Chloe, but Chloe cannot trust Philip – he is way too unpredictable. Brady went through the same thing with Kristen, although on a much more criminal scale. Kristen had kept insisting she had changed, but deep down, she didn’t trust Brady either – she became insanely jealous over a New Year’s Eve photo she saw of the two on the Salem Spectator website, and started on another downward spiral which lasted months! Brady will be happy with Chloe’s secret although Philip will go on a downward spiral himself!