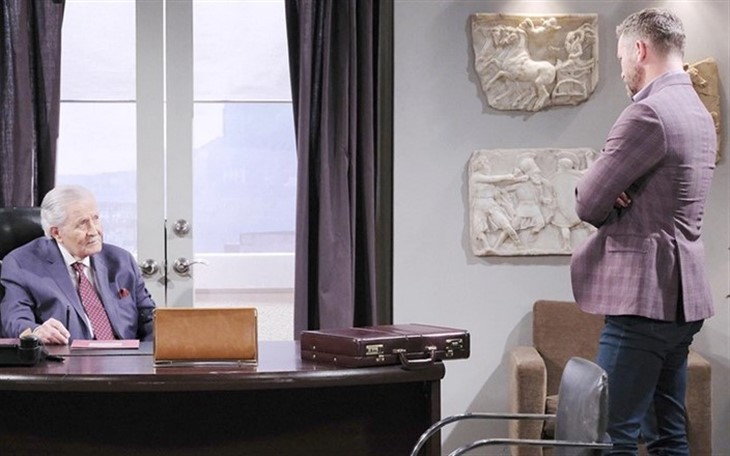 Days of Our Lives spoilers reveal that Jake DiMera (Brandon Barash) and Gabi Hernandez (Camila Banus) have reached out to Brady Black (Eric Martsolf). The devious duo plan on getting Philip Kiriakis (Jay Kenneth Johnson) out of control so they can take over Titan. It is teased that Brady conspires with Victor Kiriakis (John Aniston), leading to a win for “Jabriella.”

DOOL spoilers reveal that Jake and Gabi nearly got caught by Philip. As we previously speculated, Philip would have his computer looked at by a professional due to its constant freezing. That is when the keylogger would be discovered and that’s exactly what happened. Philip confronted Jake and Gabi, then fired them both. However, Jake did damage control as he proved that a keylogger was also installed on Gabi’s computer.

The devious pair were able to keep their jobs at Titan as it was suggested to Philip that Brady might be responsible. Then, Jake and Gabi met with Brady and expressed their concern about Philip’s paranoia. Gabi insisted that it should be a family member that goes to Victor. That is when Philip showed up.

When Philip sees Brady, Jake and Gabi together, he will accuse them of all scheming together. Even though Philip is right about Jake and Gabi, Brady is actually an innocent pawn in the plan. He’s being manipulated by the Titan newcomers and doesn’t even realize it. There is already bad blood between Philip and Brady, so that makes the situation even more volatile.

Days Of Our Lives Spoilers – Going To Victor Kiriakis

Days of Our Lives spoilers for the week of September 20 reveal that Brady will talk to Victor about the situation. He could go about this a few different ways, but will definitely include Philip’s paranoia, chasing Brady and Chloe Lane (Nadia Bjorlin) all the way to Pennsylvania and the death threats. At some point, Philip’s unsent email to Brady will probably come into play. When Victor sees all of this, he might agree with Brady that Philip is too unstable to run Titan.

It is teased that Jake and Gabi will have something to celebrate. Since their main mission right now is to get Philip out of the CEO position, it sounds like Victor makes a decision. Even though Victor would prefer a family member to run Titan, he’s out of options. Brady is over at Basic Black, one of Titan’s main competitors. Xander Cook (Paul Telfer) has pretty much been disowned and doesn’t even have the Kiriakis name anymore. So, Victor might not have any choice but to pick either Jake or Gabi as CEO of Titan.

However, don’t expect this change to last long. Philip has an ally in his corner that could blow up Jake and Gabi’s plan. That person is none other than Ava Vitali (Tamara Braun).