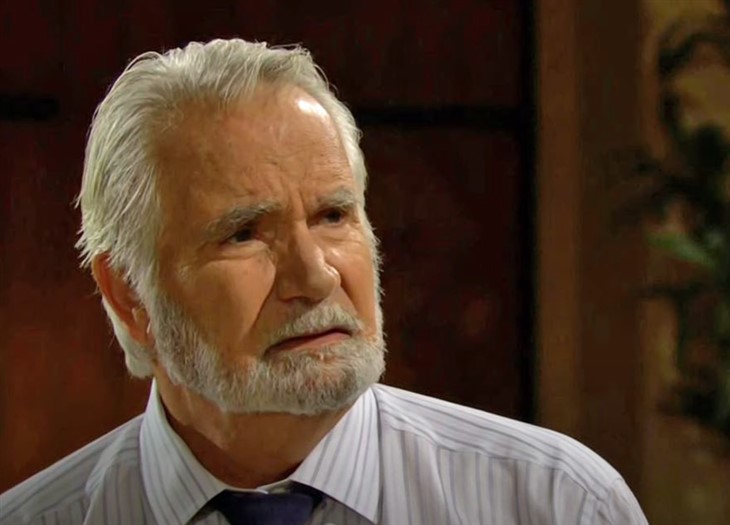 The Bold and the Beautiful (B&B) spoilers for Wednesday, October 20, 2021, reveal in Port Charles Eric confronting Carter on what will happen now.

The Bold And The Beautiful Spoilers – Is It Really Open For Carter Walton And Quinn Forrester?

Carter Walton (Lawrence Saint-Victor) couldn’t help himself and asked Quinn Fuller (Rena Sofer) to just run away with him and forget the life she has built with Eric Forrester (John McCook). But Quinn couldn’t do it. She’s invested too much into her marriage and loves Eric so she’s not about to let it go now. Yes, she has feelings for Carter but her feelings for Eric are stronger.

Apparently, Eric needs some reassurance because he goes to Carter and asks him what his intentions are with Quinn now. Isn’t Quinn choosing him enough? Does he have to make Carter feel worse? And will he find it strange that Katie Logan (Heather Tom) is there when he arrives?

Zende Forrester (Delon De Metz) is apparently a man who kisses and tells because he can’t wait to blab to Hope Logan Spencer (Annika Noelle) about his night of love and romance with Paris Buckingham (Diamond White). We’re sure this will go over well with Paris and Hope needed to hear all of this.

The thing is Hope might become the woman everyone turns to about Paris’s love life. Hope and Thomas Forrester (Matthew Atkinson) are great friends now, as well as co-parents, and he tells her almost everything. Now he has a thing for Paris and she is even living with him, albeit platonically.

What will Hope say when Thomas tells her he’s as crazy about Paris as Zende seems to be? And who knew Paris would be such a popular young woman that two men are so enamored by her? And let’s hope that Thomas doesn’t become obsessed again. Stay tuned to The Bold and the Beautiful weekdays to see how these stories play out.