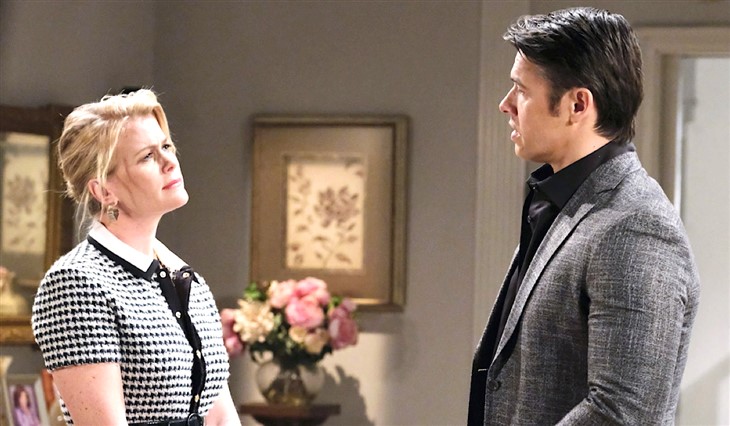 Days of Our Lives (DOOL) spoilers reveal that in Salem Xander Cook (Paul Telfer) took Sami DiMera’s (Alison Sweeney) deal and busts up “Ericole”. He already knows that he will lose his job. However, he doesn’t predict that Brady Black (Eric Martsolf) and Nicole Walker (Arianne Zucker) will ruin Xander’s life. Losing his job is the least of his concerns as his freedom could be next.

DOOL spoilers reveal that last week, Xander vented about the “toxic” work environment at Basic Black. There was a heated altercation between Xander and Brady. When Xander first blackmailed Nicole for the job, he thought that he would have it made. It wasn’t until later that he realized Brady wasn’t going to make the arrangement pleasant.

Remember, Brady hates Xander with a passion. When Brady and Nicole were on the run and went to Canada, the entire situation exploded. Xander shot Brady and left him in the cabin to die. Brady has never forgotten that, as well as everything Xander did to Nicole during their forced marriage.

Xander put himself in a tough position. However, it gets even worse because of his involvement with Gwen Rizchech (Emily O’Brien). He took drastic action to protect Gwen from Dr. Clay Snyder (Michael Lowry). Now that Julie Williams (Susan Seaforth Hayes) has connected the dots, Eli Grant (Lamon Archey) is involved. He’s not going to give up until he gets to the truth. While Xander and Gwen didn’t kill Dr. Snyder, they are guilty of inappropriate disposal of a corpse… which is a serious crime.

Days of our Lives (DOOL) Spoilers: Greg Vaughn Opens Up About Reprising His Role as Eric Brady #Days #DOOL #DaysOfOurLiveshttps://t.co/kTdo9rBgmK

Days of Our Lives spoilers reveal that Nicole feels that her entire life has been ruined because of Sami and Xander. She will get revenge on Sami soon enough when Philip Kiriakis (Jay Kenneth Johnson) gives her Kristen DiMera’s (Stacy Haiduk) letter. However, the drama isn’t over for Xander. There is no way that Nicole or Brady will allow Xander to walk away from this unscathed.

In Salem, secrets always have a way of coming out. Xander thought that Julie or even Eli was his biggest problem. However, that’s just the tip of the iceberg. It is stated that Xander realizes he made a big mistake by crossing Nicole. Most likely, Brady and Nicole end up somehow finding out about Dr. Snyder. They will use this to their advantage in order to make Xander suffer. The question is how far will they go to ruin Xander’s life the way he ruined Nicole’s? Could they end up going too far? We will have to keep watching the NBC soap to find out.