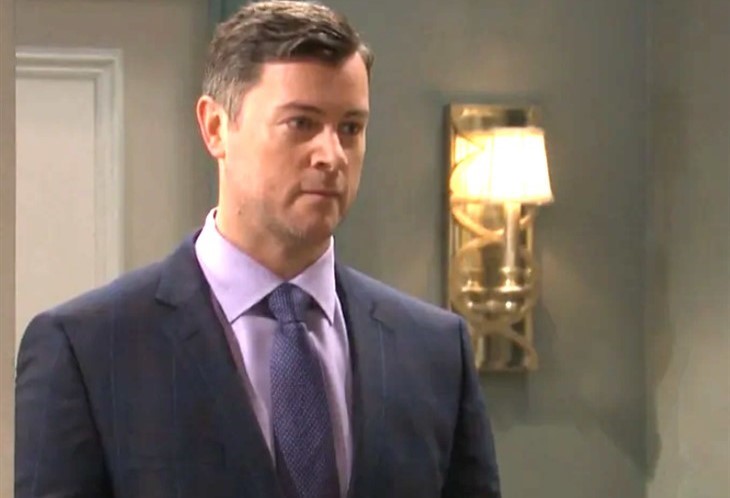 Days of Our Lives (DOOL) spoilers reveal that EJ DiMera (Dan Feuerriegel) will explode when he reads Kristen DiMera’s (Stacy Haiduk) letter. Sami DiMera (Alison Sweeney) slept with EJ’s worst enemy. It is teased that Xander Cook (Paul Telfer) will get an unexpected opportunity and Lucas Horton (Bryan Dattilo) is in danger. Could all of these events be connected?

DOOL spoilers reveal that Xander accepted Sami’s deal. Initially, it seemed as if he was going to turn her down. However, when Gwen Rizczech (Emily O’Brien) told him about Julie Williams (Susan Seaforth Hayes) and Eli Grant (Lamon Archey), Xander knew they were in trouble. Money can buy pretty much everything in soaps, including freedom.

It is teased that Xander ends up regretting his decision to accept Sami’s offer. He already predicted that he would get fired from Basic Black. However, something more must happen in order for Xander to actually feel remorse.

It is confirmed that we are going to see the return of EJ’s dark side. In the weekly preview, he explodes with rage after reading Kristen’s letter. He will confront Sami, who will try to save her marriage and explain. He will tell her that she slept with his worst enemy. EJ will also be determined to get revenge and Lucas will be his target.

Days of Our Lives spoilers reveal that Xander gets an unexpected opportunity. EJ likely finds out that Xander took $1 million from Sami to expose Nicole Walker’s (Arianne Zucker) one-night stand. Xander has done a lot of evil deeds over the years and EJ needs a henchman. After all, don’t all soap villains have someone who does their dirty work for them? What will make this even juicier is that Xander and Gwen are in legal hot water. EJ just might be able to get them out of it, but he wants something in exchange.

It is suggested that Lucas’ life will be in danger. Sami will probably try to reason with Xander, but she won’t have access to any more money. Sami and Xander are not friends, so she won’t really have anything to offer him. To Xander, there is something more valuable than money and that’s to keep himself, as well as Gwen, out of prison.

Sami knows that Lucas is in real danger and will try to get creative to save him. However, will she be able to rescue her former flame without making herself the target of EJ’s rage? He might love Sami more than anything, but betrayal can be fatal in the DiMera universe.