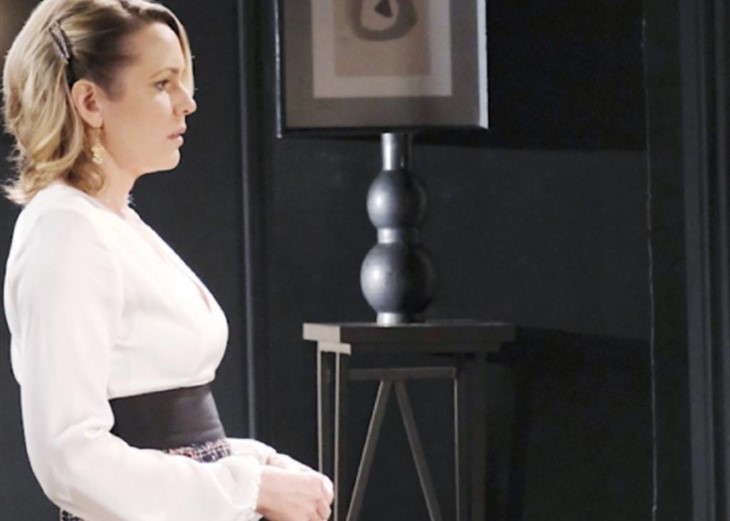 Days of Our Lives viewers will recall that Kristen wrote EJ a letter about Sami’s cheating with Lucas Horton (Bryan Datillo) and then called EJ about it. The letter itself, as Days of Our Lives viewers will recall, has changed a few hands on its path to ultimately landing with Nicole. First, Gabi Hernandez (Camila Banus) had it, having picked it up with her and Jake DiMera’s (Brandon Barash) mail that she had gone to pick up after she and Jake moved out of the DiMera mansion. Jake snatched it out of her hand and read it and was planning to use it against EJ but Gabi prevented him from doing so.

Sami had always been a friend and ally to Gabi, so she took it back and gave it to Sami, even though now both of them knew the potentially explosive secret. Sami had to steer EJ from the fireplace in a near miss, although after she had gotten him properly distracted, she returned to the living room to burn the sordid evidence of her affair. From there, it went to Lucas – he had been in the mansion and saw Sami try to burn it and retrieved it. He had intended to hand it to EJ himself, but then was interrupted by his mother, Kate Roberts (Lauren Koslow). Lucas, still with the letter on his person, went to Brady’s Pub where he encountered his half-brother Philip Kiriakis (Jay Kenneth Johnson). There, he confessed his and Sami’s affair to Philip, and plotted how to get Sami away from EJ so Lucas could have her back. Philip then took the letter.

DOOL Spoilers – The Big Blow Up

Days of Our Lives viewers will recall that after Sami found out the letter hadn’t been burned, she went to make a deal with Xander Cook (Paul Telfer). Unfortunately, he was in the Salem Police Department suspected of being responsible for the death of Dr. Clay Snyder (Michael Lowry). Sami ultimately got him bailed out and got him one million dollars to expose Nicole and his one night stand in the Salem Inn. Xander shows up at the Brady Pub, where Eric Brady (Greg Vaughan) and Nicole were having a first anniversary party, Eric having shown up at home unexpectedly. Xander makes the announcement in front of all of Nicole and Eric’s family and friends that Nicole had been unfaithful to Eric in his absence.

Eric flew into a rage and punched him out in front of everyone! Eric wanted to know if Xander’s allegations were true, and Nicole was shamed into confessing what they had done – also right in front of everyone, including his parents and all their friends and family! Eric, furious, devastated, and embarrassed, ran out the door of the pub, headed back to his and Nicole’s apartment to pack and head back to Africa.

Nicole starts running after him but not before warning Sami that she just put one foot in her grave, in front of EJ who was also at the party with Sami! After Eric and Nicole’s permanent breakup, since Philip was also there at the party he contacts Nicole letting her know he has just what she needs to push Sami rest of the way in! Nicole, letter in hand, delivers it to EJ in his office. EJ reads the letter, which does not mince words about Sami, and at first looks like he’s going to throw up. Then in a rage, he sweeps his desk clean! It looks like Hurricane Sami is no match for Hurricane EJ!