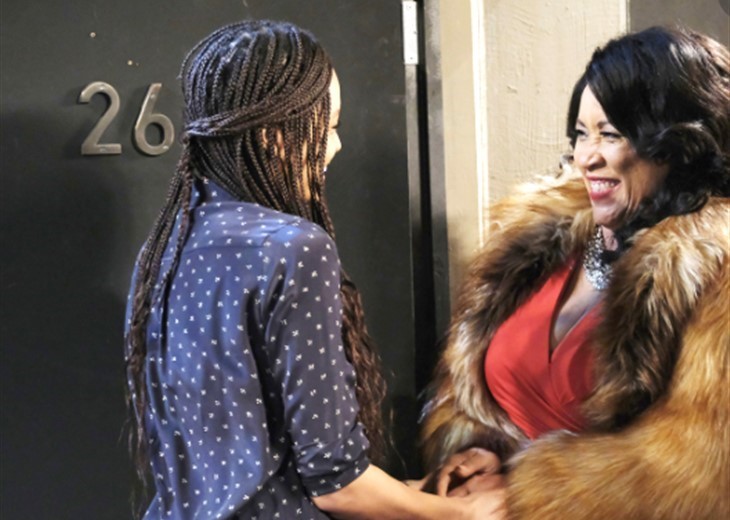 Days of Our Lives (DOOL) spoilers reveal that Jackée Harry will appear on our television screens on March 1. Her first scene is showing up at Lani Price Grant’s (Sal Stowers) door. Paulina Price didn’t tell her niece that she was coming to Salem, but they seem happy to see each other. Plus, Harry reveals that Paulina is loaded with money, as well as lots of secrets and scandals.

DOOL spoilers reveal that ever since it was announced that Harry was joining the soap, we have only been giving a few details here and there. In a new interview with Entertainment Weekly, the actress gives new information on Paulina. She is from Miami and her bank account is loaded. She’s a real estate mogul who is independent, opinionated, and successful. When she comes to Salem, Paulina is really going to shake up the town.

Harry also teased that coming from Miami, Paulina is from an environment where everyone has secrets and scandals. Apparently, Paulina is no different. Expect to learn about her scandalous life history, as well as many secrets that she is keeping. However, like many soap characters, those mysteries and secrets won’t come out right away.

“Paulina has plenty of money and she lives in Miami. She’s scandalous. I mean, you gotta be scandalous on Days of Our Lives — you need murder, scandal, and divorce! You also need secrets, and she has plenty. Secrets that’ll be exposed later.”

Days of Our Lives spoilers reveal that Harry confirmed why she shows up unexpectedly in Salem. She comes to visit her niece, Lani, and meet the “Elani” twins. It turns out that Lani and Paulina must be pretty close. We can’t imagine that the role of godmother would be given to just anyone.

Harry tends to play big, loud, and proud characters. She is also absolutely hilarious and viewers will find that her character is, as well. The actress teased that Paulina wants to jump Abe Carver’s (James Reynolds) bones! However, it is also stated in spoilers that Paulina gives the mayor the side-eye. So, we have to wonder if she was turned down or if there’s another reason for that. In either case, expect a lot of scenes between Abe and Paulina, whether they become romantically involved or not.

Check out the video clip of Harry’s first scene as Paulina Price and tell us what you think. What do you want to see happen with the character? Will she turn out to be one of the good guys, a villain, or is she in a class of her very own? Get ready for her big debut on March 1, 2021. (VIDEO HERE)