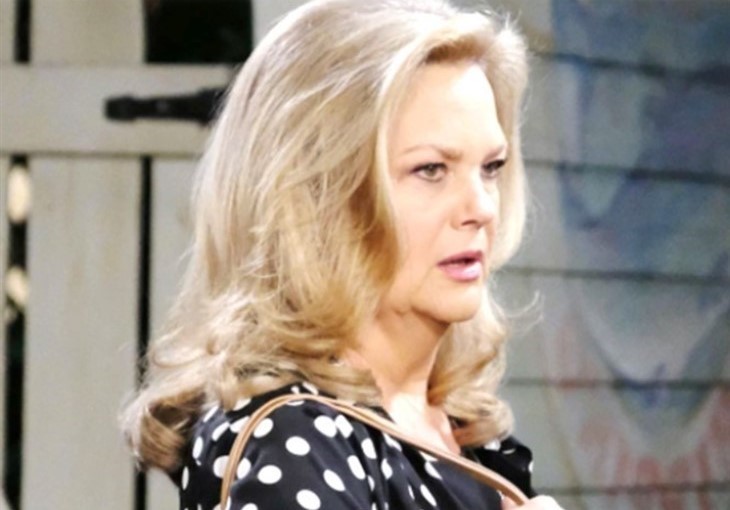 Days of Our Lives (DOOL) spoilers for the week of March 1 reveal that in Salem Anna DiMera (Leann Hunley) makes a surprising discovery. This happens around the same time that Chad DiMera (Billy Flynn) confides in Anna about Abigail DiMera (Marci Miller). Could Anna find Gwen Rizczech (Emily O’Brien) being held hostage in the DiMera tunnels?

DOOL spoilers reveal that Jack Deveraux (Matthew Ashford) gets into a terrible fight with Abigail. It has to do with Gwen and the fact that Jack is defending her after everything she’s done. Convinced that Gwen murdered her grandmother, Abigail wants justice and has nothing more to say to her father. She might even say that if Jack won’t do anything about Gwen, then she will.

Jack turns to Chad after he argues with Abigail and gives him a heads up. Not only is he hoping that Chad can talk to Abigail, but is concerned about her mental state. Jack wants both of his daughters to be okay. The way things are going, Jack hasn’t made them any better. Instead, they have gotten much worse. Jack is frustrated, confused, and doesn’t know what to do.

After learning what happened from Jack, Chad opens up to Anna. He confides in her everything going on. Just like Jack, Chad will be concerned. He hopes that Anna will reassure him that everything is going to be fine. However, she might already have a sneaking suspicion that things are about to hit the fan.

Days of Our Lives spoilers reveal that during the week of March 1, Anna makes a surprising discovery. We can’t imagine what it would be besides Gwen. When Abigail and Gabi kidnap the manipulator, they are going to have to hold her somewhere. The best and safest place for Gwen to be held hostage without someone alerting the authorities is in the DiMera tunnels. After all, many people over the years have been kept prisoner down there.

Even though Anna will be shocked to see Gwen bound and gagged, she might not untie her. Anna thinks that Gwen deserves to be punished and should be scared. She just might let her sit and sweat it out for a bit. Of course, she’s not going to let Abigail kill her half-sister either. She will likely talk to Abigail and tell her what she found. When Abigail tries to justify her actions, Anna will reason with her in a way that nobody else can. She might also have something to say about Abigail teaming up with Gabi.

In the end, Gwen will be just fine. The actress is a long-term core character, so don’t expect her to die or go to prison. However, she certainly has made a lot of enemies in the short time she has been in Salem. Abigail might not be the only person that wants to harm her.