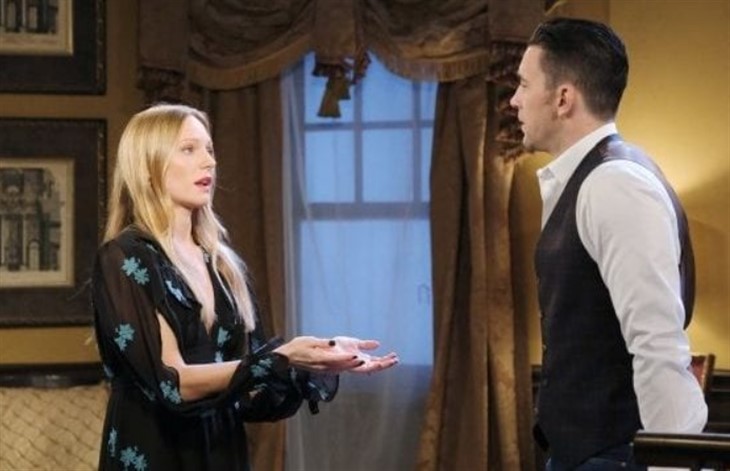 Days of Our Lives (DOOL) spoilers tease that Gwen Rizczech (Emily O’Brien)being pregnant with Chad DiMera’s (Billy Flynn) baby is just the latest obstacle in the marriage of Chad and Abigail DiMera (Marci Miller). The couple has made it through a number of issues over the last few years and there is no doubt that they love one another, but perhaps it is time for them both to take a good, long look at their relationship. And while all relationships take hard work, these two have really suffered at the hands of the other.

Days Of Our Lives Spoilers – Abigail DiMera’s Long-Standing Mental Health Issues Were Only The Beginning.

As viewers know, when Abigail accidentally killed Andre DiMera (Thaoo Penghlis), her personality fractured. Not being able to face what she had done, Abigail surrendered to a personality known as “Gabby” which her mind loosely based on Gabi Hernandez (Camilla Banus).”Gabby” formed an immediate and mutual attraction to Stefan DiMera (Brandon Barash). At one point, Chad discovered his wife in bed with Stefan. It took a lot of work and intensive therapy, but Chad and Abigail managed to fight their way back to one another. But the relationship was anything but solid, and it was fairly easy for the real Gabi to take advantage of their problems.

Another victim of Abigail’s mental health issues was the real Gabi. Lying on the witness stand, Abigail provided the damning testimony that got Gabi convicted of Andre’s murder. While in prison, Gabi was severely beaten and the injuries were so severe that Gabi was told she would likely never be able to have any more children. So when Gabi was finally released from prison, she pretended to forgive Abigail but secretly plotted against her. Abigail soon found herself pregnant and confided to Gabi that the baby might be Stefan’s. Blood tests proved that not to be the case, but Gabi managed to change the results. Chad couldn’t accept that Abigail was having another man’s baby, so they once again separated. And once again they reunited when Gabi’s lies were exposed. Wanting a new start, the couple moved to Paris to start a new life together. Things went well for the couple but they missed Salem, and once again trouble began to plague them.

Days Of Our Lives Spoilers – Gwen Rizczech Was Determined To Destroy Abigail’s Life!

Gwen hated the Devereaux family because she was Jack Devereaux’s (Matthew Ashford) daughter and she believed that he abandoned her. She drugged Abigail’s champagne and Abigail began to have hallucinations. She went to Florida for treatment and much to Gwen’s dismay and returned home a few months later mostly cured. But Gwen didn’t think Abigail had suffered enough so she convinced Chad that Abigail was having an affair with Jake DiMera (also Brandon Barash). Sadly, Chad was easy to convince and he got drunk and hopped into bed with Gwen.

Do Chad and Abigail have a love worth fighting for? Or is the fact that it’s been so easy for others to come between them mean that at their very core, this couple doesn’t trust each other? Would they both be better off if they just called it quits? Or can they make it work despite everything? Sometimes love may not be enough in Salem, so stay tuned to Days of Our Lives spoilers airing on weekdays on NBC. And don’t forget to check back right here regularly for all your Days of Our Lives news information and spoilers!