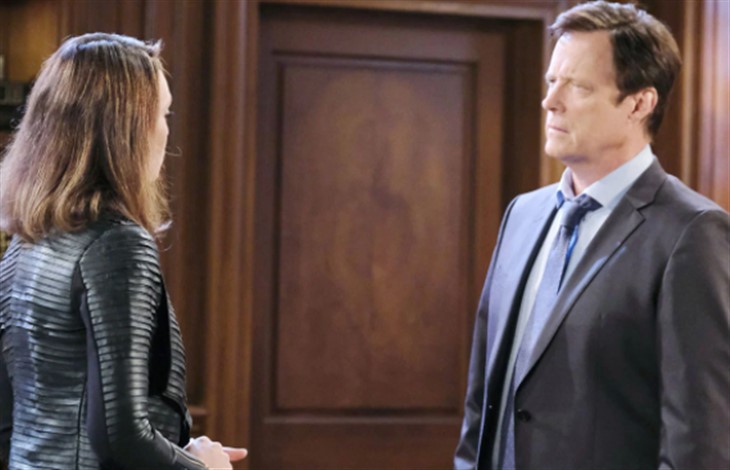 Days of our Lives (DOOL) spoilers reveal that a horrible tragedy could be about to occur in Salem. It involves a nasty mother to be Gwen Rizczech (Emily O’Brien) and the rest of her newfound family.

In a terrifying Friday Cliffhanger, Gwen fell down a flight of stairs to the horror of three of her new family members. They seemed to stare an awfully long time at her inert body, will she be taken to the hospital in anything resembling an expeditious manner?

Days Of Our Lives Spoilers – Gwen Rizczech Is Not Popular

Gwen came to town with evil intent on her mind. She knew she was Jack Deveraux’s (Matthew Ashford) daughter but no one else did. She had a chip on her shoulder and was determined to make Jack’s other daughter Abigail DiMera (Marci Miller) pay for what in effect was something she was not guilty of.

Gwen tried to fry Abi’s brain with chemicals and when that didn’t work she went after Abi’s husband Chad DiMera (Billy Flynn).

DOOL Spoilers – Gwen Rizczech And Abigail DiMera Do Not Get Along

Chad acted like a typical himbo, getting drunk and getting undressed. To his credit, Gwen set it up to appear that Abigail had cheated on him. It was not true but Chad is not the sharpest tool in the shed. Feeling sorry for himself he let Gwen have her way with him and in the end Gwen got pregnant.

No one knew what to make of this unexpected yet predictable outcome. Least of all Abi told everyone that Gwen should terminate her pregnancy. It was harsh and apparently, her wish came true.

Days Of Our Lives Spoilers: Belle & Shawn Question If Jan Was Out Of Her Coma When Charlie Was Killed #Days #DOOL #DaysOfOurLiveshttps://t.co/YuyWARj527

Earlier in the day prior to her fall Gwen rushed to the ER with cramps and a terrible premonition. She was examined and told by a doctor that she, unfortunately, had lost her baby. Gwen was distraught and returned to her new digs only to be confronted by Abigail. The two tussled at the top of the stairs and in horrifying fashion, Gwen tumbled like a bad bitcoin stock.

What happens next? Fans are speculating like crazy about Gwen’s next move. She will surely be taken to the hospital after the witnesses stop gaping at her prone body. Will she tell the truth or will she frame Abi for the murder of her unborn child by saying she was pushed?

General Hospital (GH) Spoilers: Nina Goes On A Date With Elijah, Will He Use Her Against Sonny?