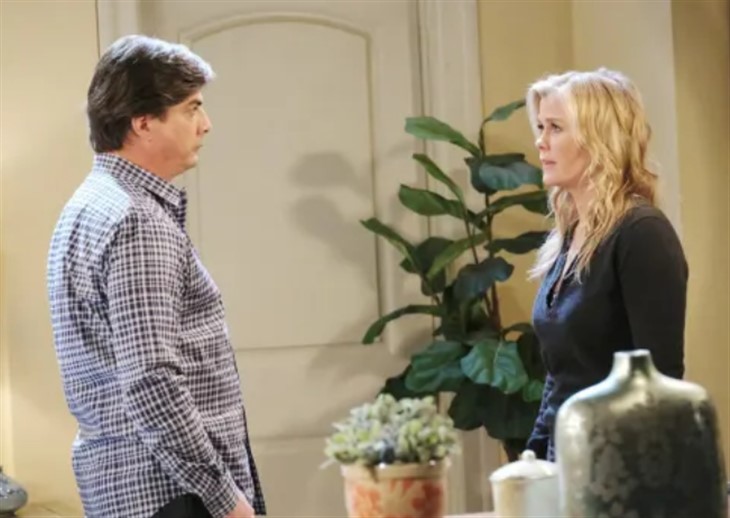 Days of Our Lives (DOOL) spoilers reveal that we are going to see a blast from the past. In order to help Lucas Horton (Bryan Dattilo) convince Chloe Lane (Nadia Bjorlin) he is dying, Sami Brady (Alison Sweeney) pulls out an old disguise. Of course, it’s her old male alter ego, Stan (Dan Wells). However, the plan might fail as Chloe gives “Lumi” a warning.

DOOL spoilers reveal that Sami and Lucas’ night together was not as discreet as they thought. After getting her ex out of the door, Sami faced who she thought was Susan Banks (Stacy Haiduk). However, she would soon see the disguise come off. Kristen made a deal with Sami and part of that is getting Chloe away from Brady Black (Eric Martsolf). So, Sami came up with the brilliant plan of Chloe not being able to resist Lucas’ charm.

However, when Lucas lied to Chloe about his feelings for her, she had just told Brady about her own feelings. She also is sensing that something is off about Lucas’s claim. Having to think fast, Lucas blurted out that he had a deadly brain tumor and wanted to spend his last days with her. As we previously speculated, Chloe would try to get Lucas the best doctors, tests, and treatments. This presents a big problem since Lucas has no brain tumor.

Days of Our Lives spoilers reveal that Sami will use an old trick of hers. Many years ago, Sami had a male disguise. She alter ego was named Stan and she just happens to still have it. The plan is for Dr. Stan to convince Chloe of their story. There is reason to believe that the scheme will backfire, though.

Days Of Our Lives Spoilers: It Looks Like An Allie And Chanel Romancehttps://t.co/7RikAdYvGL

By the end of the week, Chloe warns Lucas and Sami. We imagine that Lucas isn’t able to go through with the fake romance or Chloe might not be fooled by Stan. So, what exactly does she want them about? We don’t think this is a threat from Chloe. It sounds like she’s genuinely worried because she knows what Kristen is capable of.

We also know that around this same time, Kristen’s plans really start unraveling. When visiting “Kristen” in prison, Susan’s acting is less than stellar. In fact, she makes a huge slip right in front of Brady. Meanwhile, Roman Brady (Josh Taylor) heard that Kate Roberts DiMera (Lauren Koslow) seems “off.” This leads to Roman testing her, which indicates this Kate is fake! So, where is the real Kate and can she be saved before it’s too late?