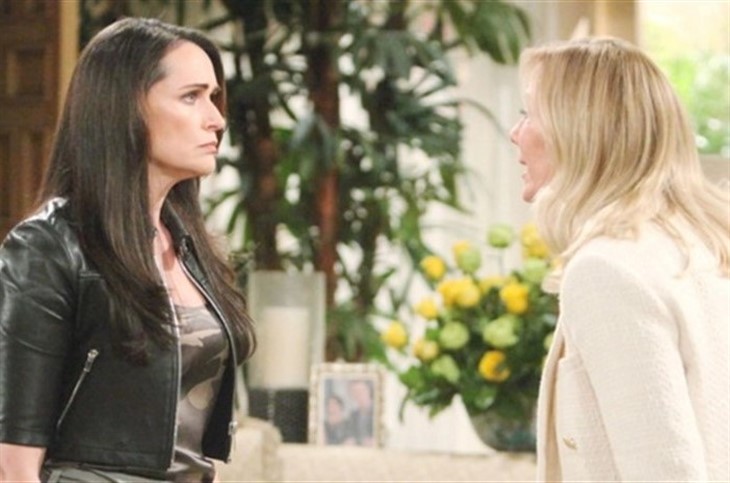 The Bold and the Beautiful (B&B) spoilers reveal that it wasn’t too long ago when Brooke Logan Forrester’s (Katherine Kelly Lang) forbidden kiss was exposed. Now she is able to get payback. Brooke figures out Quinn Forrester’s (Rena Sofer) secret when Carter Walton (Lawrence Saint-Victor) makes a mistake. He starts defending Quinn too often and too passionately.

The Bold And The Beautiful Spoilers – Eric Forrester’s Marital Crossroads

B&B spoilers reveal that Eric Forrester (John McCook) is at a crossroads with his marriage. After their last split, Eric eventually took his wife back and claimed to have forgiven her. However, he has been avoiding Quinn and pushing her away ever since. He is beginning to open up to a few people about his relationship. He’s not sure what to do but is certain of two things. The first is that he didn’t truly forgive Quinn for sabotaging Brooke’s marriage. The second is that he doesn’t know if he will ever be able to trust Quinn again.

Quinn never gives up, so don’t expect her to throw in the towel with Eric. However, she is getting distracted by Carter. It began with Quinn trying to encourage him to give Zoe Buckingham (Kiara Barnes) another chance. Then, the conversation turned to Quinn and Eric’s marriage, as well as their sex life. Even though the two haven’t done anything yet, it looks like it’s headed in that direction.

From where we are sitting, it looks like Quinn likes eye candy. As for Carter, he seems excited to have someone he can open up and talk to. Let’s face it, both of them are lonely and that might be the only real connection.

The Bold and the Beautiful spoilers reveal that Brooke and Ridge Forrester’s (Thorsten Kaye) reconciliation was ruined. Quinn used the family get-together to expose Brooke and Bill Spencer’s (Don Diamont). Exposing the betrayal on the night “Bridge” was celebrating getting back together was hurtful. However, Quinn’s scheme also broke up Bill and Katie Logan (Heather Tom), who are still not back together.

Brooke will get suspicious when she vents to Carter. She talks about all the terrible things Quinn has done to her. As she fumes about her enemy, Carter defends Quinn. Now, if it just happened once or twice, Brooke probably wouldn’t think anything of it. However, it seems that Carter not only defends Quinn multiple times but with a lot of passion and oomph.

The Bold And The Beautiful Comings And Goings: The LAPD Are Back And So Is A Goodtime Showgirlhttps://t.co/7H3u0NK6RB

The Bold And The Beautiful Spoilers – Quinn Forrester Caught?

The only complication Brooke would have with this is how it could damage Carter. Eric and Ridge trust the COO completely. They not only work together but are friends, as well. Betrayal — if it was not planned — is difficult to get over. Brooke might be able to get payback without using Carter’s name. However, if Eric is going to be told about Quinn’s secret activities, then he will want to know the man’s name. To find out Brooke’s decision and Quinn’s future, keep watching the CBS soap.

The Bold And The Beautiful (B&B) Spoilers: Bill Spencer Clashes With Police