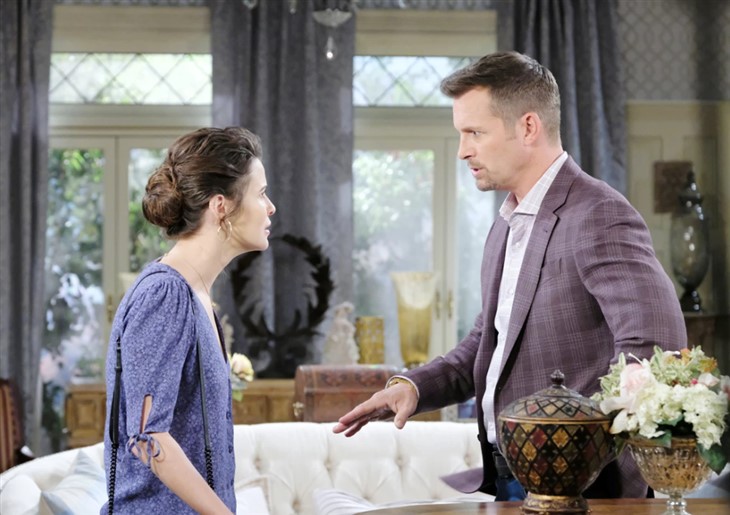 Days of Our Lives (DOOL) spoilers reveal that in Salem Brady Black (Eric Martsolf) is questioning his relationship. Despite believing in Kristen DiMera (Stacy Haiduk), he can’t ignore how quickly she’s reverting to her old ways. Meanwhile, Chloe Lane (Nadia Bjorlin) is still in denial, so Sarah Horton (Linsey Godfrey) steps in. But is Brady really ready to move on and love again?

DOOL spoilers reveal that Brady is secretly considering breaking up with Kristen. He loves the mother of his child and has done everything to support her. However, he can’t ignore that she’s going back to her old, evil ways. Trying to kill Chloe was an eye-opener for him, but he hasn’t said anything yet. When he finds out she traded places with Susan Banks (also played by Haiduk) to target Chloe, that will be the final straw. Once she gets carted back to prison, it’s likely “Bristen” will bed done.

Despite Chloe having feelings for her ex-husband, she won’t say anything or make a move on Brady. He just got out of a painful relationship and she doesn’t want to make their friendship awkward. Meanwhile, Brady isn’t even thinking about romance right now and probably doesn’t even notice how Chloe’s looking at him.

Days of Our Lives spoilers from the new issue of Soap Opera Digest reveal that Sarah gets involved. Like Philip Kiriakis (Jay Kenneth Johnson), Sarah thinks that Chloe has feelings for Brady. However, the opera signer will continue to deny it to everyone, including herself. It is suggested that Sarah will play Cupid and try to see how Brady feels about Chloe.

It’s interesting she will play matchmaker considering Chloe tries to convince Sarah not to get married. However, Sarah probably understands that Chloe was just looking out for her. The opera singer has been away from Salem for quite some time. She doesn’t know the new Xander Kiriakis (Paul Telfer). Her last experiences with him were pretty awful, so Sarah won’t hold it against her.

News Days of our Lives Spoilers: Sami Brady Comes Back to Salem on a Mission! #Days #DOOL #DaysOFOurLiveshttps://t.co/iaaOvIBz8c

Both Bjorlin and Martsolf have mentioned a possible “Bloe” pairing and are excited about the possibility. Each of them separately said in interviews that it’s surprising writers haven’t tried to reunite them before. However, there could be a love triangle ahead. Philip has made his feelings known, but was turned down. He’s not one to easily give up and may compete with Brady for Chloe’s heart. We will have to keep watching the NBC soap to see how this story plays out.