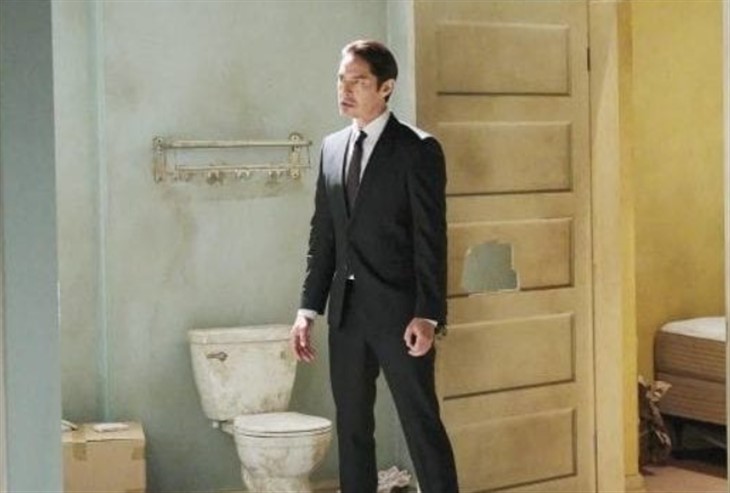 Days of Our Lives (DOOL) spoilers and rumours suggest Vincent Belman (Michael Teh) will commit suicide to keep from spending the rest of his life in prison. However, there could be much more to this story. Has Orpheus (George DelHoyo) killed Vincent to get his hands on Ciara Weston (Victoria Konefal)?

Days Of Our Lives Spoilers – Vincent Belman Is Psychotic, Not Suicidal

Days of Our Lives Vincent is obviously psychotic, who else would join Eve Donovan (Kassie DePaiva) in her crazy scheme to get rid of Ben Weston (Robert Scott Wilson)? However, Vincent wanted to make Ben pay for killing his fiance’ years ago. However, Vincent had no desire to die and join Wendy Taylor (Denise Duff) in the afterlife. Vincent would have never killed himself and left Rhodes (Jason Downs) stuck with a hostage that no one is paying for. Vincent wanted Ben and Ciara to suffer and would want to hear about everything that her disappearance was putting them through. Vincent simply would not commit suicide.

Days of Our Lives Orpheus hates Ciara after she forced his son to confess to Jordan Ridgeway’s (Chrishell Stause) murder. Orpheus would do anything to get back at Ciara even if it means killing Vincent. After all, a prison suicide can’t be that hard to set up. Orpheus tends to walk in and out of Statesville like it’s a spa anyway. Orpheus obviously had guards in his back pocket just like Clyde Weston (James Read) always had. Vincent is just another useless criminal who can’t do anything for the guards, one of them could have been paid to kill him for Orpheus.

Days Of Our Lives Spoilers: Kristen Threatens Vivian, Then Leaves Susan To Deal With Fallout?https://t.co/BIotVVFmgM

Days Of Our Lives Spoilers – Will Orpheus’ Plan Work?

Days of Our Lives Orpheus has plans to use Ciara but to what end? Ciara is tied to Marlena Evans (Deidre Hall) and John Black (Drake Hogestyn) which is a plus for him. Orpheus also wanted to get rid of Ben even though he is Clyde’s son. Orpheus could use Ciara to lure several of his enemies to one place and get rid of them all. After all, Orpheus could use Ciara to get to Rafe Hernandez (Galen Gering) as well. Orpheus was furious when Rafe had custody of Christian Maddox’s (Brock Kelly) son and blames him for trying to keep the child. Taking Ciara is just like taking Rafe’s daughter as far as he is concerned. Holding Ciara and torturing her would be pure joy for Orpheus.

Days of Our Lives Orpheus could easily see the advantages that Vincent would offer him dead instead of alive. Will the truth of Vincent’s death ever be discovered?

Days Of Our Lives (DOOL) Spoilers Wednesday, May 12: Kristen’s Desperation…

Days Of Our Lives (DOOL) Spoilers Tuesday, May 11: Nicole Gets Devastating News…