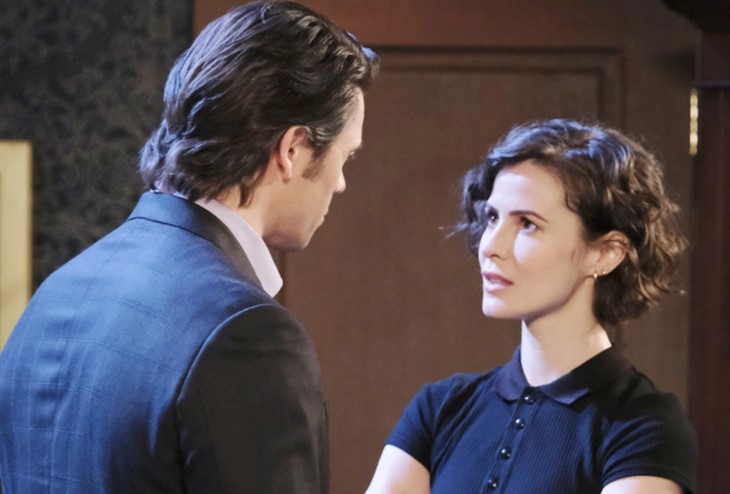 Days of Our Lives (DOOL) spoilers reveal that in Salem Sarah Horton (Linsey Godrey) catches Xander Kiriakis (Paul Telfer) in a compromising position. She walks in to find the maid kneeling in front of Xander and his pants are unzipped. She probably calls off the wedding, but he scrambles after her. Apparently, Xander has a perfectly logical explanation!

DOOL spoilers reveal that the weekly promo shows Xander and the maid in a compromising position. The weekly promo shows the maid kneeling in front of Xander and she’s messing with his zipper. Now it looks bad, but he likely had a stuck zipper. Those can be difficult to fix and knowing Xander, he doesn’t think about how it would look if Sarah walked in at that moment. Of course, that is exactly what happens.

It is teased that Sarah will walk in and what she sees is Xander standing shirtless and a maid is kneeling in front of him. She has her hands on his zipper and as one can imagine, it doesn’t look innocent. Sarah thinks that Xander is cheating on her and reacts like a betrayed fiancee. She most likely yells and fires off accusations while Xander tries to get a word in so he can explain. Before he can though, Sarah probably tells him the wedding is off and they are done.

Days Of Our Lives Spoilers – A Perfectly Logical Explanation

Days of Our Lives spoilers reveal that Xander will chase after Sarah. He’ll ask her to calm down so he can explain what the maid was doing. As usual, Xander isn’t very good with words and he will just end up making Sarah even angrier. Plus, Chloe Lane (Nadia Bjorlin) told her not to marry the semi-reformed villain. At the time, she dismissed Chloe’s concerns, but now she will think the opera singer was right all along.

It might take some time and a lot of begging, but Sarah will eventually calm down. Once Xander explains that his zipper got stuck and the maid offered to help, the two will probably kiss and make up. The good doctor should know by now that Xander sees no other woman except for her. He holds her up on a pedestal and would never cheat on her.

A few weeks ago, head writer Ron Carlivati told Soap Opera Digest that “Xarah” would run into obstacles on their way to the wedding aisle. He teased that fans would have to keep watching to see if they actually end up getting married or not. What do you think is going to happen with this couple? Will they become husband and wife or are the cards stacked against them?