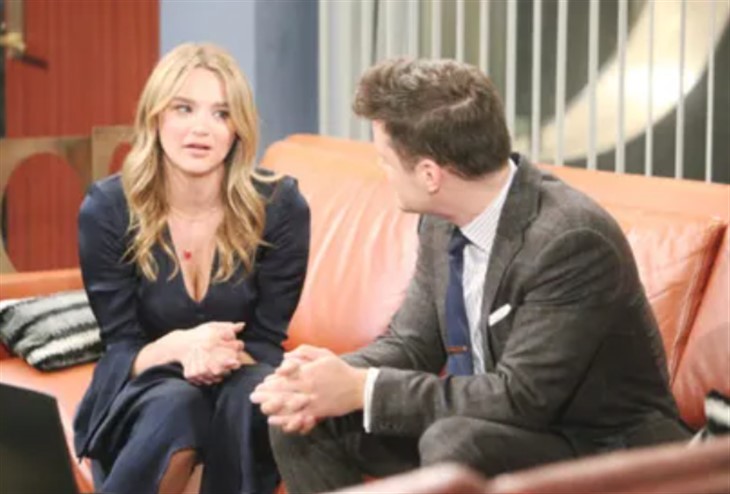 The Young and the Restless (Y&R) spoilers document that in Genoa City, Wisconsin Kyle Abbott (Michael Mealor) had another chance to tell Summer Newman (Hunter King) the truth and again failed to do so.

She will not forget the opportunities Kyle had to take her into his confidence, as a loved one should do. His lie about the photo of Harrison Locke (no actor known to be cast for this role) being a college friend’s child was foolish.

Theo Vanderway’s (Tyler Johnson) claim that he happened upon a perceived paternity reveal is highly suspicious. But with however Theo came to learn and then pass along this information, Kyle now needs to know if he has a son.

The Young And The Restless Spoilers – No Need For Secrets

Kyle should have learned from his Kola days. He confronted the Zoe Hardisty (Anna Grace Barlow) situation that Theo wrongfully facilitated and all worked out well in the end.

Tara Locke (Elizabeth Leiner) was a name from Kyle’s past. He thought the messy relationship that happened in New York during the last decade was buried.

However, it must be said that the above situation doesn’t compare to potentially being the father of Tara’s child. But the lesson is that, like Lola Rosales (Sasha Calle), Summer is trusted loved one who should be told the truth.

Kyle is playing into Theo’s game by withholding the full New York story from Summer. Telling her about his relationship with Tara was good, but should have been followed by the uncertainty he’s facing.

Skyle wasn’t together when Kyle and Tara were connected. Kyle has already seen that Summer isn’t upset that he was involved with Tara and that King’s character has been supportive.

So, telling the truth is not only the right thing to do, it will lessen Kyle’s emotional burden. Summer is an ally, not a person to keep at bay.

The Young And The Restless Spoilers – Giving Sally Spectra Another Weapon

Sally Spectra (Courtney Hope) has taken the baton from Theo. She believes that Skyle is neutralized and can’t use back-stories from The Bold and Beautiful against her.

However, Ashland Locke (no actor known to be cast for this role) won’t be Skyle’s only concern if Harrison is Kyle’s son. Sally will gain the ability to use that potential paternity weapon to her advantage as well. That’s another reason why Kyle must realize that Summer deserves to know about his dilemma as soon as possible.