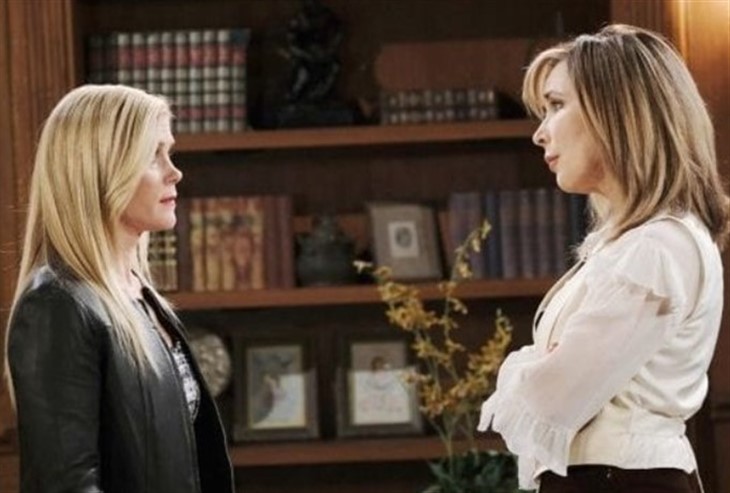 Days of Our Lives (DOOL) spoilers suggest that Sami Brady (Alison Sweeney) believes she is protecting her daughter, Allie Horton (Lindsay Arnold), who she believes killed Charlie Dale (Mike Manning). However, it seems there is another suspect and it just may be Kate Dimera (Lauren Koslow).

Days of Our Lives Allie Horton (Lindsay Arnold) threatened to shoot Tripp Dalton (Lucas Adams) when she thought he was the person who raped her. Allie went as far as to pull a gun on him. If Ava Vitali (Tamara Braun) hadn’t arrived when she did, Allie would have shot him. Sami knows that Allie is trying to follow in her footsteps and protect herself. Sami is convinced that Allie did this and wants to protect her daughter. Allie has a child to raise and Sami will go to prison to protect her. Could Sami be protecting someone else though?

Kate Dimera Threatened To Get Revenge

Days of Our Lives Kate also threatened to make Allie’s attacker pay. Of course, at the time, she was referring to Tripp. That doesn’t mean that Kate didn’t go after Charlie. After all, Kate believes in taking care of her own and Allie is very close to Kate. Sami could very easily be protecting Kate instead of Allie. After all, most people in Salem that are close to Allie wanted Charlie to pay. Kate wouldn’t think twice about killing someone and letting someone else take the blame. Did Kate kill Charlie and leave the gun there? Is Sami protecting Kate instead of Allie?

Of Course, Ava Vitali Could Have Done It With Kate Dimera’s Gun

Days of Our Lives Kate is a very likely suspect. However, unless Kate has more than one gun, Ava could have done it. When Allie tried to shoot Tripp with Kate’s gun, Ava took it. Ava could have shot Tripp with Kate’s gun and framed her by leaving the gun there. After all, Ava said she could understand Sami shooting Charlie. Ava wouldn’t want Allie to pay for Charlie’s death because he hurt her. However, Kate is a different story. Sami wouldn’t protect anyone but her child for murder. Sami has told Lucas Horton (Bryan Dattilo) that she would go to prison for their daughter. Is Allie guilty? Did Allie murder Charlie?

Sami did shoot Charlie but claims he was already dead. If Allie’s name is cleared, will Sami go to prison anyway for abusing Charlie’s corpse?

The Young And The Restless (Y&R) Spoilers: Phyllis Tries To Help Faith As She Shares Words Of Wisdom