The Young And The Restless (Y&R) Spoilers: Phyllis Tries To Help Faith As She Shares Words Of Wisdom 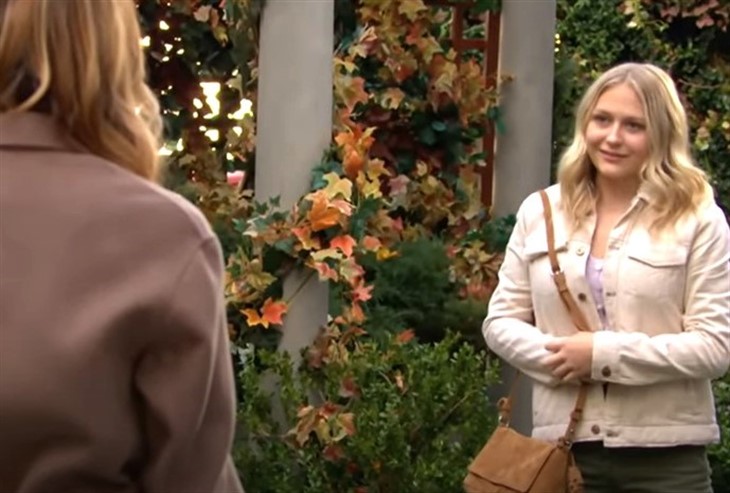 Phyllis has been keeping a watchful eye over Faith ever since she discovered her drinking in Chancellor Park, and seeing her with her older “friend” Jordan (Madison Thompson) several months ago. It just seems natural for Phyllis to want to display motherly feelings for Faith, since she is Nick Newman’s (Joshua Morrow) daughter and they have become so heavily re-involved over the last several months. She knows, through Nick, and Faith’s having moved back in with him for a few weeks that Faith had been going through a very rough time with bullies, and this after Billy Abbott’s (Jason Thompson) exposé of Adam Newman (Mark Grossman).

Why teenagers have to bully someone over her being kidnapped by her uncle as a baby is a mystery to Phyllis, and even to Nick. Phyllis has done some bad things in her life but even she would not be so cruel as to bully someone over being kidnapped as a baby! The several months prior, Faith’s mother, Sharon Newman Rosales (Sharon Case) had gone through a breast cancer scare, and now her stepfather, who she is quite attached to is seriously ill from a mysterious ailment! It came on very suddenly but so far had not appeared to be contagious. That is one blessing! But there is one thing that even Phyllis doesn’t know about Faith – she’s been texting with what appears to be a teenage boy.

Faith has become very sneaky and very sly, and no one, not even Phyllis has picked up on Faith’s texting with a teenage boy. It was obvious in a recent episode of The Young and The Restless that if Faith does have a boyfriend, she wants to keep it a secret. One can only hope that this is a boy and not a predator, as child predators and pedophiles as well as human traffickers are rampant, and they look for young girls like Faith online.

The day Rey became very ill, Faith had asked if she could go to the Newman Ranch instead of back to Nick’s and Sharon had said okay. The only problem was her grandparents weren’t there. Nikki Newman (Melody Thomas Scott) was at Newman Enterprises with Victoria Newman (Amelia Heinle) and Victor Newman (Eric Braeden) was with Adam at Society, where they were waiting for a decision from Ashland Locke (Richard Burgi) as to who had won the bid for Cyaxares Media.

The Young And The Restless (Y&R) Spoilers: Sally Risks Jack Relationship – Gets Too Close to Kyle’s Ashland Problems https://t.co/RknltmJjwX pic.twitter.com/5CIThAI1rH

Faith appeared to be going to meet the boy, who had texted her with a heart in his message. They may decide to meet in the park or somewhere else where Phyllis may spot Faith waiting to meet up! If that is the case, Phyllis most certainly will intervene and ask Faith if she is waiting for someone – and she will give her some words of wisdom. She will tell Faith not to trust people online she doesn’t know. Even if this is a boy and Phyllis sees them together, she will likely tell Faith it may not be safe to meet with a boy alone at her age – she is only fourteen! She will want to know all about what Faith is up to and hopefully prevent more pain or worse for Faith!