Days Of Our Lives (DOOL) Spoilers Next Week: Rex Has Shocking News For Kate And Roman 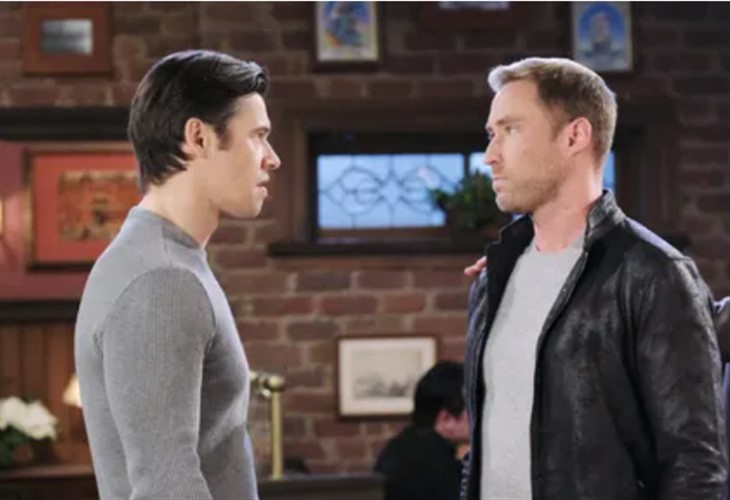 Days of Our Lives (DOOL) spoilers tease that in Salem Rex Brady (Kyle Lowder) will have shocking news for Kate Roberts (Lauren Koslow) and Roman Brady (Josh Taylor) in an upcoming episode of Days of Our Lives!

While Brady Black (Eric Martsolf) and Xander Kiriakis (Paul Telfer) are both in the dark about the current locations of their significant others, Rex thinks he and Sarah Horton (Linsey Godfrey) have reconciled! Little does he know that the woman he had a hot evening with is not Sarah, but Kristin DiMera (Stacy Haiduk) in a Sarah mask! Meanwhile, Susan Banks (Stacy Haiduk) is still in Statesville Prison, impersonating Kristin! Kristin would be in some dire straits with Brady if he only knew the woman that he encouraged to fight for was really his own girlfriend in disguise, cheating on him with Rex!

Kristin probably figures no one will be the wiser since she’s disguised as Sarah, who she has had to hide out to keep her quiet about her prison outing! Rex is so thrilled – Brady and Chloe Lane (Nadia Bjorlin) had pushed him to go after Sarah and rescue her from that scoundrel Xander, and they were right! Sarah didn’t really love Xander, why on earth she consented to marry him is beyond him-she’d said she’d led him on as revenge for swapping her and Kristin’s babies! Rex and Kate both are shocked – they didn’t think Sarah could be so deceptive! Kate notes that sounds more like a scheme of Gabi Hernandez’ (Camila Banus) than something Sarah would do! Rex doesn’t care. He knew this was likely his last chance to win Sarah back, and now he’s got her!

Xander couldn’t believe it when Susan called and tattled on Rex and Sarah! Rex had approached him and Jack Deveraux (Matthew Ashford) at the Brady Pub at his bachelor party that had Jack as the only attendee. Rex had a lot of snide remarks and didn’t like at all that Xander was seeing his ex-wife, let alone marrying her! When Xander went to get married, the bride didn’t show up and he was incensed, figuring Rex had something to do with it! But he also knows that there have been some unsavory characters around town and she could have met with some misfortune; and that is saying a lot for Xander to refer to someone else as an unsavory character!

Ciara Weston (Victoria Konefal) had recently been found and brought back to Salem, and while the condition and whereabouts of Christian Maddox aka Evan Frears (Brock Kelly) is unknown Xander knows he’s a lot more dangerous in a sense than dear old dad Orpheus (George Del Hoyo). Xander doesn’t communicate with anyone in Statesville Prison anymore, but he still keeps his ears open for “security” reasons! Then he hears from Susan! Xander doesn’t think Rex is shifty enough to have kidnapped Sarah, but something doesn’t sound right and he is sure Sarah wouldn’t have shafted him like that!