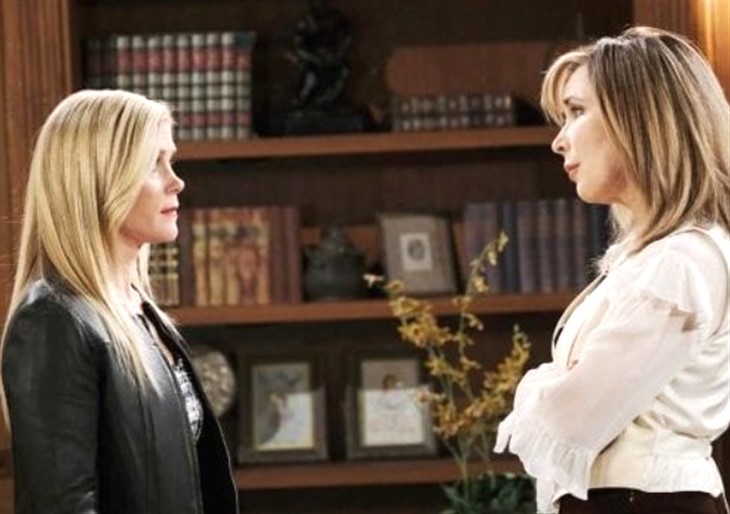 Days of Our Lives (DOOL) spoilers confirm that in Salem Sami Brady shows up in Salem on February 25, 2021. She is back for most of the year in an emotional storyline. In a new interview, actress Alison Sweeney couldn’t give away too much. However, she did say Sami is on a mission and acknowledged her family won’t exactly be thrilled to see the Salem schemer.

Sami Brady Is On A Mission

DOOL spoilers reveal that fans have been waiting for Sami’s next return to Salem. Since leaving the NBC soap opera as a series regular, the character has been back for short visits. Many viewers wanted to see Sami stick around for a bit longer and interact with more characters. They are getting their wish.

According to the new issue of Soap Opera Digest, Sami will be seen on-screen again on February 25, 2021. The exact length of her stint has not been confirmed. However, when she inked the new deal last year, it was reported that Sami would be on-screen for most of the year. Fans were also told that it would be an emotional storyline. That led to a lot of theories on if it was connected to EJ DiMera (formerly James Scott) or if Sami would once again try to interfere with her grandson’s custody agreement. While those issues might be mentioned, it seems that Sami will be back for something — or someone — entirely different.

Days of Our Lives spoilers reveal that Sweeney confirmed to TV Insider that things have not improved off-screen between Sami and Belle Black (Martha Madison). As fans recall, Sami was so determined for Nicole Walker Brady (Arianne Zucker) to lose the custody case that she had Jan Spears (Heather Lindell) released. The sociopath roamed Salem and befriended Belle and Shawn Brady’s (Brandon Beemer) daughter, Claire Brady (Isabel Durant). While Sami left the country, Belle and her family were left to deal with the fallout. Belle was nearly killed and Jan tried to take her place at the “Shelle” wedding.

Days Of Our Lives Spoilers: Connected To Charlie Dale

It is teased that Sami’s return and her mission have to do with Allie Horton’s (Lindsay Arnold) rapist, Charlie Dale (Mike Manning). He doesn’t go to prison and that is unacceptable to Sami. She will take matters into her own hands, as usual. At least, that is what seems to happen, but we could be in for an unexpected plot twist. Sami might just look guilty and really be innocent of murder. What we do know for certain is that Sami asks Belle to represent her in court. However, with the whole Jan shenanigan still fresh in her mind, we’re not sure if Belle will take Sami’s case or not. We will have to keep watching the NBC soap to see how this story develops.