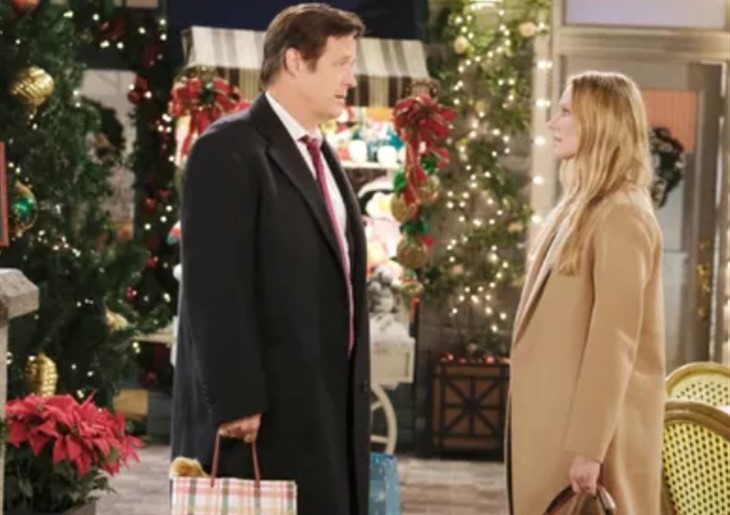 Days of Our Lives (DOOL) spoilers and rumors tease Abigail DiMera (Marci Miller) puts her revenge plan into action. However, she is furious when Jack Deveraux (Matthew Ashford) defends Gwen Rizczech (Emily O’Brien). She is so angry that she may just cut him off. We know she refuses to release her captor. This family has fractured once again.

Days Of Our Lives Spoilers Updates – Plotting With Gabi Hernandez

DOOL spoilers reveal that Abigail has gone to her enemy to ask for help. Even though Abigail and Gabi hate each other, they were best friends at one point. Besides, Abigail is going to need some help to pull off the ultimate revenge scheme. She can’t turn to Chad DiMera (Billy Flynn) or anyone else because their “goodness” will get in the way. She needs a partner who won’t be afraid to cross lines and won’t hesitate to dole out the harshest punishment. Gabi has a lot of good traits, but she is a natural villain… and she excels at it. Plus, Abigail knows that Gabi can’t stand Gwen which is icing on the cake.

During the week of March 1, Abigail and Gwen will put their plan into action. Abigail is convinced that Laura Horton’s (Jaime Lyn Bauer) death was no accident. She doesn’t care what Gwen says or what the police determine. In her mind, Gwen is guilty of murder and she must pay the price. It is confirmed that Abigail and Gwen will kidnap Gwen!

Days Of Our Lives Spoilers & Rumors – Playing The Blame Game

Days of Our Lives spoilers and rumors reveal that for most of Gwen’s life, she blamed everything on her half-sister. Instead of holding her father responsible for not being there (even though he didn’t know she existed), Gwen blamed Abigail. Now the tables have turned a bit and it seems that Abigail is blaming Gwen for everything going wrong.

Now, it is clear that Gwen did some damaging things. She slept with Chad, but it’s not like she forced Chad into bed. In fact, Gwen said “maybe we shouldn’t do this,” but Chad insisted. Plus, Gwen wouldn’t even have an opening to destroy “Chabby” if they had dealt with their problems like adults. Instead, they ignored the issues, pretended that everything was just dandy, and let the resentment simmer until it erupted.

When Jack finds out that Gwen has been kidnapped and Abigail is responsible, he will defend his new daughter. Abigail will be furious with her father, especially since she thinks Gwen murdered Laura. Gwen was angry because Jack “chose” Abigail over her. Now it’s completely flipped and Abigail is livid that her dad is taking Gwen’s side over his “real family.”

Even though Abigail might disown her father, it won’t be forever. The Deveraux family has been fractured many times before. But every single time things eventually worked out and they were brought back together again. It might take some time, but this fractured family will be reunited again. We’re just not sure how the writers can fix all the damage. We will have to keep watching to find out.

Be sure to catch up on everything happening with DOOL right now. Come back here often for Days of Our Lives spoilers, recaps, soap opera news, and NBC Days updates.