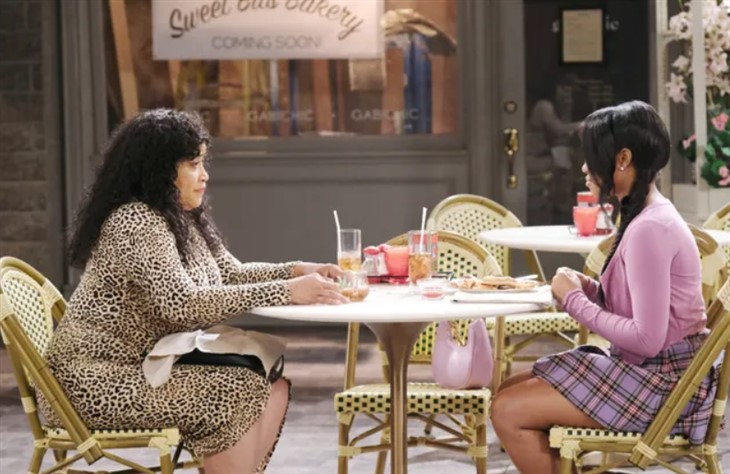 Days of Our Lives (DOOL) spoilers for the week of July 5 reveal that Paulina Price’s (Jackée Harry) deception will be exposed. Lani Price Grant (Sal Stowers) is furious and Chanel Dupree (Precious Way) is devastated. However, Abe Carver (James Reynolds) learns about Paulina’s traumatic past and it could help explain her bad decisions.

Days Of Our Lives Spoilers – Secrets And Scandals

DOOL spoilers reveal that Harry previously teased what fans could expect from her new role on the NBC soap. At the time, she hinted that Paulina was a woman with many secrets and scandals. We are seeing her continue that pattern in Salem. For one, she is deceiving everyone about her real plans for Horton Town Square. The truth will come out during the week of July 5. Not only does she disappoint and upset Abe, but Chanel is also devastated. Meanwhile, Lani reels from the bombshell.

DOOL Spoilers – Deceiving Her Own Family

We know that Paulina was extremely successful in Miami. The real estate mogul is very wealthy. When she saw negotiations taking place for a suite in Horton Town Square, she wanted to learn more. She couldn’t believe the low price and knew she could make a hefty profit from it. However, she needed it rezoned, which required Abe’s signature. She also claimed that she wanted to make a massive indoor marketplace that would allow more non-whites to run small businesses in the historic area.

What we know is that the blueprints don’t look like an indoor marketplace. It looks like a generic office building. So, we aren’t sure what she is really planning to do. There was one scene in which Paulina got upset because the city was going to give the tenants one year of free rent. So, is money so important to Paulina that she would betray her own family?

Days Of Our Lives Spoilers – Paulina Price’s Traumatic Past

Days of Our Lives spoilers for the week of July 5 reveal that Paulina will share her traumatic past with Abe. She is a pretty guarded person and we actually don’t know a lot about her. We know what she wants people to perceive, but we don’t know what has made Paulina into the woman she is today. Like many complex and flawed characters, she was molded by both wonderful events during her life, as well as traumatic experiences.

A lot of people who have traumatic pasts tend to deal with it in different ways. For some, it actually changes their thinking and they make choices that might not make much sense to the rest of us. So, whatever trauma Paulina experienced, it is something that softens Abe’s anger toward her.

We are also wondering if this is why Chanel is so upset and being comforted by Allie Horton (Lindsay Arnold). We initially believed it was due to Paulina’s secret plans for the property, which might leave Chanel without her bakery. But now we are certain Chanel becomes emotionally distraught over Paulina’s trauma. Somehow it affects the young lady. So, is Paulina even Chanel’s real mother? Was the troublemaker a product of an assault? Is her father not who she thinks? We will have to keep watching the NBC soap to find out.