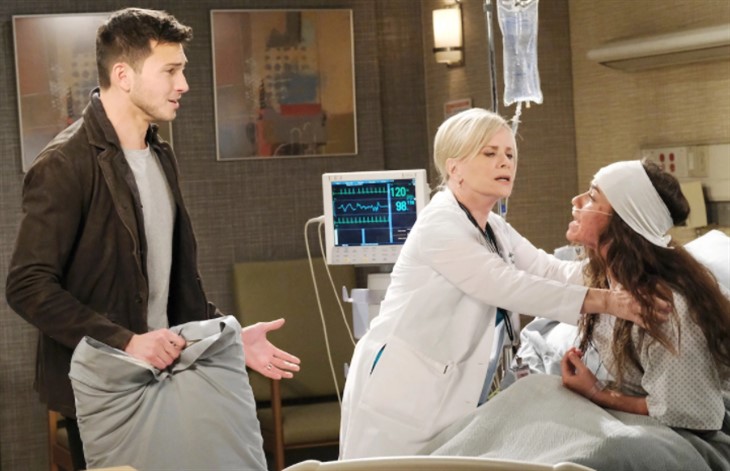 Days of Our Lives (DOOL) spoilers tease that Ciara Brady’s (Victoria Konefal) might be so traumatized by everything that she and Ben Weston (Brian Scott Wilson) have had to go through since they fell in love. She seems even more scared of Ben now, than she was the first time they met. If Ciara was honest with herself, she was very naïve when it came to her relationship with Ben.

She thought just because Ben wasn’t the same person he used to be, that his past as a serial killer didn’t matter! But almost everything the couple has suffered through these past few years if because Ben’s past wasn’t just erased. From finding a job with his criminal record to previous victims wanting revenge, Ben’s murderous behavior was something that Ciara should have thought about more before jumping into a relationship?

Days Of Our Lives Spoilers – Ciara Brady Is Much More Bothered By Ben Weston’s Past Now Than She Ever Was In The Past.

Viewers may notice that the fact that Ben was once the Necktie Killer is bothering Ciara much more right now than it did the first time. It’s likely not a coincidence that Ciara’s amnesia only goes back to right before she met Ben. Of course, deep down Ciara and Ben are soulmates but it’s good that Ciara is much more wary of Ben’s past. Perhaps if she had taken more time in the beginning to really understand what Ben had done, and how it hurt so many other people. And because of those people, such as Eve Donovan (Kassie DePaiva), Ben and Ciara haven’t had a moment’s peace.

While Ben was sick, he killed three women and believed he had also murdered Will Horton (Chandler Massey) until it was discovered that Will actually survived. One of the young women who Ben ended the life of was Paige Larson (True O’Brien). Paige was Eve’s only daughter and although they certainly didn’t have the best relationship, when Ben strangled Paige, Eve’s world was shattered. And then Ben went free and could roam the streets of Salem and fall in love like he had done nothing wrong. Any parent would feel the same way. And although Eve’s plan to brainwash Ben into killing Ciara was horrible, its no surprise that she was so broken that all sense of reason went out the window.

But Ciara and Ben have both suffered terribly because of their love. That love will never really die and eventually Ciara will also come to that same realization, but the amnesia might actually be a gift that they both will be glad about down the road. If Ciara realizes that she can no longer put on rose colored glasses if she remembers and they reconcile. Ben has to know deep down that Ciara had always been in a kind of denial about his history. When and if she returns to him , it will be with a full understanding that Ben will always have trouble finding work, and that its completely understandable that some people won’t be able to let his past go. It has nothing to do with the man he is today. That man is good. But history can’t be changed and while Ciara will have to decide whether or not she can forgive Claire Brady (Isabel Durant) for trying to burn her alive twice, that’s the same thing Eve struggled with.

Has Ciara’s amnesia be her psyche’s way of making sure that she realizes exactly how horrible the things Ben did when he was sick. Ciara loves Ben there is no doubt, but their relationship can only improve if they are real about the struggles they will always have to face yo each other. Ciara may never forgive Claire, but if she doesn’t she can’t expect Eve to forgive Ben.

How long do you think it will be before Ciara remembers everything and finally decides that Ben is worth it. Sometimes the residents of Salem can’t escape the past, but perhaps a move away from Salem where not everyone knows who Ben was might be a great way to start. Days of Our Lives airs weekdays on NBC, so make sure you turn in every day. And don’t forget to check back right here for all your Days of Our Lives news, information and spoilers.