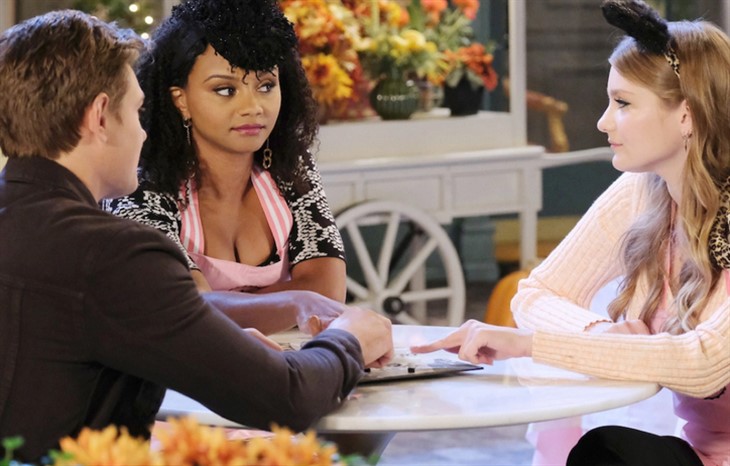 Days of our Lives (DOOL) spoilers divulge that our inside source at NBC is hearing some mighty explosive dish about a newlywed couple. It seems there is a romantic triangle in play and one of the newlyweds can’t keep her hands off her groom’s sister!

Aye caramba, what were those crazy kids Johnny DiMera (Carson Boatman) and Chanel Dupree (Raven Bowens) thinking when they rushed into marriage in Italy? Maybe they weren’t thinking, they were lusting, at least that’s what Johnny’s sister Allie Horton (Lindsay Arnold) believes. Did we mention she and Chanel have flirted and kissed?

Days of our Lives Spoilers – Allie Horton Is A Cheat?

The besties were all the rage back in Europe before Allie returned to her hometown and Chanel and her mom popped up in Salem. Imagine the surprise when Dupree and Horton got a load of each other in little old Salem after partying hard together across the pond.

These two were so excited to see one another that one thing led to another and before you know it watching movies and eating popcorn together turned into an awkward kiss. After some stumbling around, both women agreed there was nothing between them and they opened up a bakery, all Hallmark movie like. Except that soaps are not clean and virtuous and Hallmark-y, they are devilishly complicated, just ask MarDevil (Deidre Hall).

Long story short, when the newlyweds broke the news to Allie and her boo Tripp Dalton (Lucas Adams) Allie went berserk. As in calling her bro out as a gigolo basically, but with a name like Giovanni what should one expect?

Chanel was confused and Johnny was peeved, and Lucas looked mighty uncomfortable when Johnny blurted out that his sister wanted his wife.

Days Of Our Lives spoilers – Will Giovanni Be Left Out In The Cold?

Allie denied everything and eventually apologizes to the pair for her ballistic reaction. But lo and behold, our source tells a different story. According to our insider at NBC, Chanel and Allie cheat behind Johnny’s back. We can’t give too much away, but we do know that on Friday, January 7, Johnny makes a huge announcement. Did he find his wife and his sister in bed together?