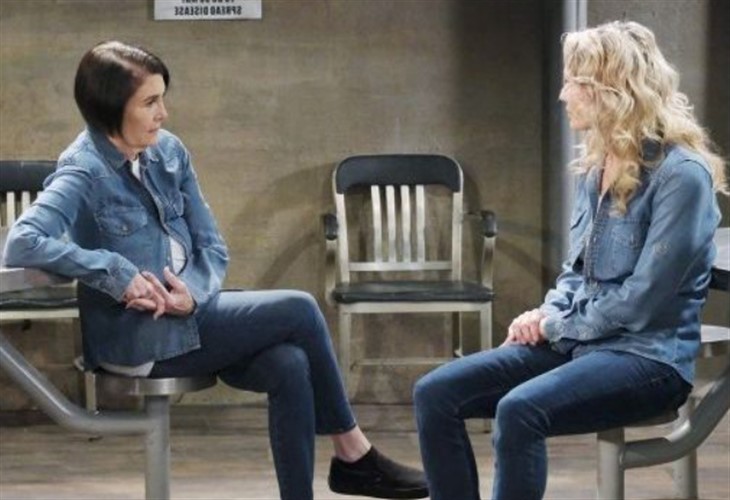 Days of Our Lives spoilers for the week of February 22 reveal that Kristen DiMera (Stacy Haiduk) and Vivian Alamain (Linda Dano) make a pact. Kristen should be furious with the villain for the twins’ kidnapping, so this must have to do with her unquenchable need for revenge. Will she actually betray her best friend just to get help destroying Chloe Lane (Nadia Bjorlin)?

DOOL spoilers reveal that when Kristen got paranoid and accused of Chloe going after Brady Black (Eric Martsolf), the two actually were just friends. Nothing funny was going on, but you know how it goes. The more you accuse someone of wrongdoing, the more you are actually pushing them to go ahead and do it. We are going to see Chloe cross lines and get too cozy with Brady. This sparks Kristen’s need to punish her competition.

Kristen will do anything to keep Brady and Chloe apart. This even goes beyond convincing Susan Banks (also played by Haiduk) to switch places with her in prison. It is confirmed that Kristen will end up seeing Vivian in prison. While we thought at first the two were going to go to war because of Lani Price Grant’s (Sal Stowers) twins, there could be something else going on.

Days Of Our Lives Spoilers – Making A Pact With Vivian Alamain

Days of Our Lives spoilers reveal that Kristen considers Lani her best friend. While she tries to make Lani happy and is credited for reunited her with Eli Grant (Lamon Archey), Kristen is all about herself. How many times has Lani put her marriage, career, and freedom on the line for Kristen? We only see Lani risking everything while Kristen just takes, takes, and takes. Plus, she is a vengeful person by nature. So, when she makes a deal with Kristen during the week of February 22, it sounds like Kristen values revenge more than her friendship.

Days of Our Lives Spoilers This Week: Jake Exposes Gwen As A Murderer, Or Will She Silence Him? https://t.co/fFGU6NF585

It is suggested that Kristen might actually betray her best friend just to help keep her secret. We know Vivian can’t really do anything while she is inside the prison. But if Susan claims she’s not the “real Kristen” or someone starts asking questions, Vivian can do damage control. But what will Vivian get out of the deal? Kristen just might be desperate enough to target Kate Roberts DiMera (Lauren Koslow) to get her away from Jake DiMera (Brandon Barash). Or she could actually go after Lani to keep her part of the deal. It sounds like this friendship is on its way out. Maybe Lani should have listened to Eli all those times he warned Lani about being friends with a villain, killer, and criminal.