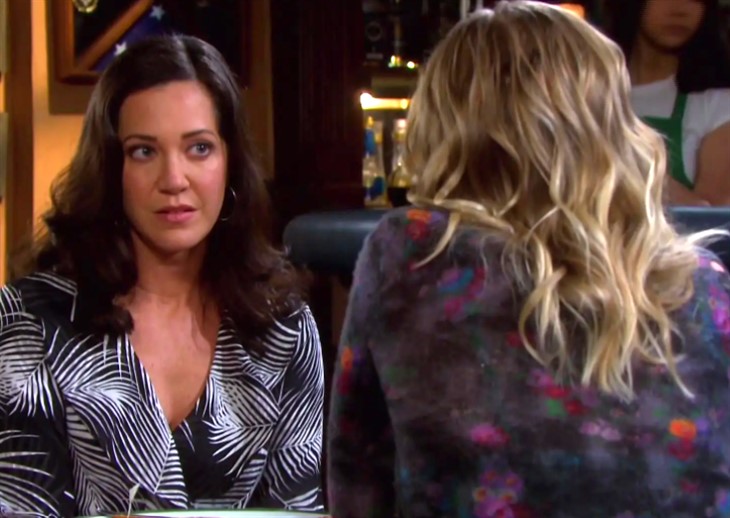 Days of Our Lives (DOOL) spoilers reveal that Gwen Rizchech (Emily O’Brien) is desperate. She can’t seem to get out of her arrangement with Dr. Snyder (Michael Lowry). She hates Xander Kiriakis (Paul Telfer), but that is who agrees to help. Of course, Xander has a price and Gwen is desperate enough to pay it. Expect Dr. Snyder to be set up, but will he fall for it?

Days Of Our Lives Spoilers -Blackmailed Into Being A Drug Mule

DOOL spoilers reveal that Dr. Snyder blackmailed Gwen and ordered her to deliver packages for him. When she got her first order, she looked inside to discover the doctor wanted her to deliver drugs. She wasn’t interested in this type of favor in exchange for Dr. Snyder’s silence. However, he isn’t the type of man that negotiates or argues with people. Gwen either does what he tells her or she’ll have to suffer the consequences.

DOOL Spoilers – Help From An Enemy

Xander has moved into the Horton house and he will cross paths with Gwen. At first, the two won’t be able to stand each other. However, Xander learns about Gwen’s dilemma with Dr. Snyder. He will help her with her blackmailer, but only because he plans on using the situation to his advantage.

Days Of Our Lives Spoilers – Gwen Rizczech Is Desperate

Days of Our Lives spoilers reveal that Gwen won’t want to accept Xander’s help. In fact, she doesn’t want anyone’s help. She’s used to taking care of herself and dealing with her own problems. However, she is over her head with this one. So, it seems that Gwen is so desperate to get rid of Dr. Snyder and his drug delivery orders that she will accept Xander’s help.

It is teased that Xander will try to set up Dr. Snyder. However, we have seen Xander’s blackmailing efforts lately. None of them worked and he couldn’t even go through with an assassin job. It appears that bad boy Xander has lost his touch. We imagine that his plan to set up Dr. Snyder will go horribly wrong. Either Gwen will have to pay the price for this, or Xander will take drastic action.

In the summer promo, a body is discovered in the water. Maybe that body belongs to Dr. Snyder, but does Xander really kill him? We know that Tripp Johnson (Lucas Adams) tells Kayla Johnson (Mary Beth Evans) about Dr. Snyder and Gwen’s argument. If the doctor shows up dead, then Kayla and Tripp could tell the police that Gwen was in a heated fight with the man. Gwen just might find herself facing murder charges.