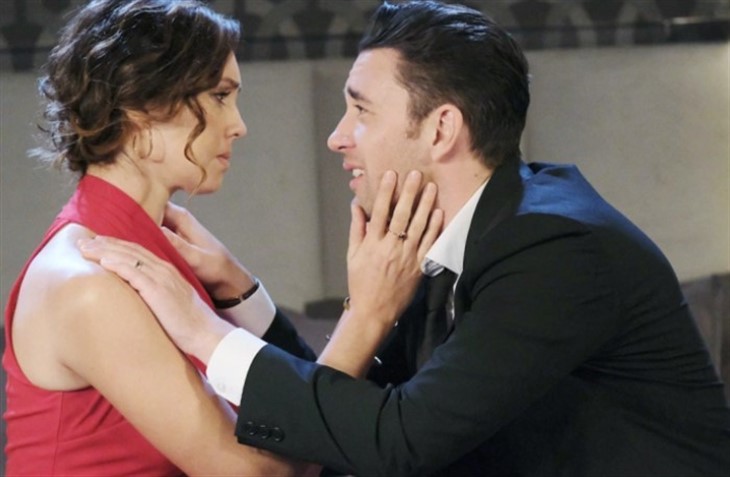 Days of Our Lives (DOOL) spoilers say that Gwen Rizczech (Emily O’Brien) is not giving Chad DiMera (Billy Flynn) much of a choice here, as she’s chosen to keep their baby, regardless of what he or anyone else in his family have to say about it. Read on for all of the latest spoilers.

According to the latest edition of Soap Opera Digest, Abigail Deveraux (Marci Miller) informs Chad that Gwen is pregnant and getting a blood test to confirm it. Needless to say, he’s in a bit of a shock. When Gwen confirms the pregnancy via the blood test, she stops by to see Chad and shares the news that she is keeping the baby.

But just because they are going to be parents, this doesn’t mean that they are going to be together. In fact, it’s going to be quite the opposite. Speaking to the publication in a new interview Billy Flynn, who plays Chad DiMera on the hit NBC soap, puts it this way, “He’s not choosing Gwen; he’s choosing to own a mistake and any repercussions that come from that.”

When Gwen starts talking about love – or what possible love may be between them – Chad is not having any of it. Instead, he chooses to remain realistic about their situation and of course, their future together. Chad quickly tells her that they didn’t have this baby out of love, but instead they are having this baby out of spite.

Not surprisingly, Abigail is not on board. Billy adds, “Abigail is in a place where she’s so mad, and on top of the mental illness, she doesn’t know which way is up. But Chad understands that she doesn’t seem like herself, so if he just talks calmly and keeps things level, maybe she will see her way back.”

Now, whether or not that happens remains to be seen. Fans will have to tune in for all of the action! Days of Our Lives airs weekdays on the NBC network. Check your local listings for times. Are you a fan of daytime television? Be sure to catch up on everything happening with Days of Our Lives right now. Come back here often for all the latest Days of Our Lives spoilers, news, and updates.