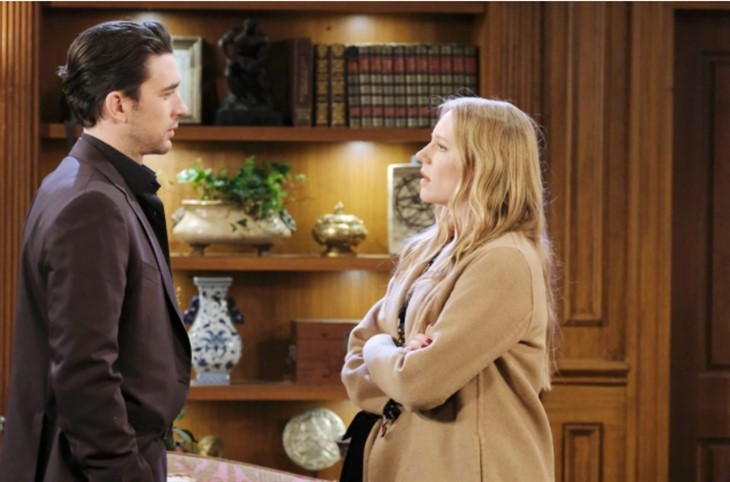 Days of Our Lives (DOOL) spoilers reveal that in Salem Abigail DiMera (Marci Miller) orders Gwen Rizczech (Emily O’Brien) to terminate her pregnancy. She will refuse and plans on keeping the baby. When this happens, Abigail could order Chad DiMera (Billy Flynn) to get rid of the unborn child. However, would Chad really follow through with such a horrific act?

DOOL spoilers reveal that Abigail tells Gwen to get an abortion. She even offers to call the clinic right then and there to make an appointment. She will even drive Gwen to make sure it gets done. Gwen can’t believe her ears and is horrified at the suggestion. Jack Deveraux (Matthew Ashford) told Abigail that everyone needed to take some time to cool their jets and think about things. In the end, Gwen decides to keep her baby.

When Gwen tells Abigail she isn’t going to get rid of her baby, she will react with rage. She will most likely turn to Chad to solve the problem. After all, if he hadn’t listened to all of Gwen’s lies to begin with, they never would have slept together. In Abigail’s mind, Chad helped create this problem and he needs to be the one to get rid of it.

Days of Our Lives spoilers reveal that if Abigail actually does this, Chad will be horrified. He will try to reason with his wife and tell her it’s 100 percent Gwen’s decision. Abigail disagrees and might even threaten to move out with the children again. So, Chad will really be stuck between a rock and a hard place. He can’t force Gwen to get an abortion and upon hearing this, Abigail could have a horrific suggestion. That Chad get rid of the baby himself by pushing Gwen down the stairs or some other way.

On one hand, Chad can understand his wife’s rage. However, this is not the type of woman that Abigail is. It is clear she has gone mad and needs serious psychiatric help. While Abigail is ranting about Gwen’s baby, Chad has accepted the schemer’s apology. He even believes that she’s remorseful. So, it is possible that Chad could institutionalize Abigail and while she’s gone, he just might get close to Gwen. The only person Abigail will have to blame this time is herself.

What do you think Chad is going to do about Gwen’s pregnancy? How will he respond when Gwen refuses to get an abortion? Is it time that he thinks about committing his wife again? If she ends up hospitalized, then will Chad and Gwen end up getting closer?