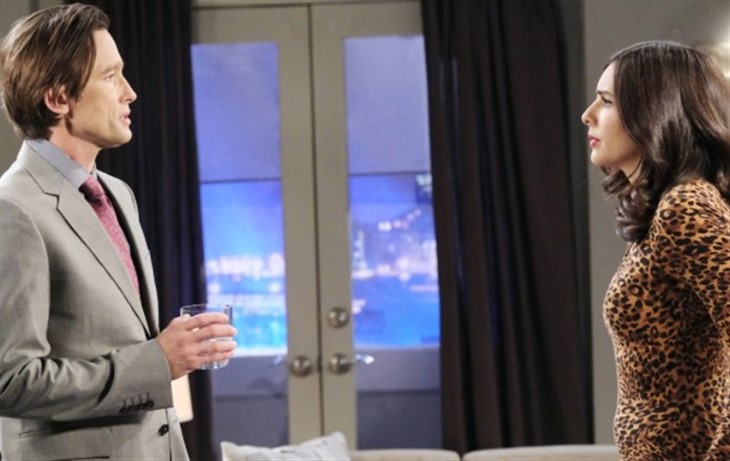 Days of Our Lives spoilers tease that when Gabi Hernandez (Camila Banus) finds out Ava Vitali (Tamara Braun) has been plotting with Philip Kiriakis (Jay Kenneth Johnson) to take her and Jake DiMera (Brandon Barash) down, she’ll verbally eviscerate her in an upcoming episode of Days of Our Lives!

Days of Our Lives viewers will recall that Ava told Philip about Jake’s hit man past in recent episodes of Days of Our Lives. In fact, Jake had worked with her cousin Angelo Vitali (Angelo Tiffe) back in Philadelphia. Philip has been looking for just that kind of dirt to make sure that Jake couldn’t worm his way into any Titan companies, and Ava has been looking to get Gabi and Jake out of the Hernandez house! Viewers will recall that when Jake first showed up in Salem going by the name “Jake Lambert” he was running from the mob in Philadelphia, and trying to get a book back from his ex-girlfriend Gwen Rizchech (Emily O’Brien) that a mob boss wanted back.

It turned out that there was code in the book that was put there for the purpose of cooking “the books”. It was much later that it was discovered that he was a heretofore unknown twin of Gabi’s late husband Stefan DiMera (Brandon Barash). Even Vivian Alamain (Louise Sorel) didn’t know about him until Ivan Marais (Ivan G’Vera) her houseman confessed he’d split up her twins at birth.

Days of Our Lives viewers can imagine that Philip was probably hoping for there to be some open warrants out on Jake DiMera aka Jake Lambert. In Salem, even serial killers are given a second chance, as is witnessed by the redemption of Ben Weston (Robert Scott Wilson)! Days of Our Lives viewers know that peoples’ pasts don’t generally bother most Salemites, unless it affects their current lives.

Longtime viewers will remember that even Doug Williams (Bill Hayes) doesn’t have the most pristine past – he started life in Salem as con man Brent Douglas, cellmate of Bill Horton (most recently John H. Martin) who was in prison for the death of his late sister in law Kitty Horton (Regina Gleason) his brother Tommy Horton’s (John Lupton) wife. Longtime Days of Our Lives viewers will also recall that Victor Kiriakis (John Aniston) was also once a mob man, quite active in the Greek mob! Only open warrants for Jake’s arrest would do anything for Philip’s intentions!

Days of Our Lives viewers can imagine that Gabi will figure Ava would have had to have given Philip his information on Jake’s hit man past, even though it could as easily have come from Gwen! However, Gwen has other issues that need her attention, such as trying to get her boyfriend Xander Cook (Paul Telfer) out of jail. Gwen would not have had any motive for divulging this intel about Jake, and she could be culpable by association for any outstanding warrants as well – and she’s got enough trouble the way it is!

Gabi already detests Ava and doesn’t want her brother Rafe Hernandez (Galen Gering) involved with her – and she wants Ava out of the Hernandez home and out of her and Rafe’s life! Gabi will absolutely eviscerate Ava verbally when she finds out about her plotting with Philip to take her and Jake down! Days of Our Lives viewers can expect a catfight!