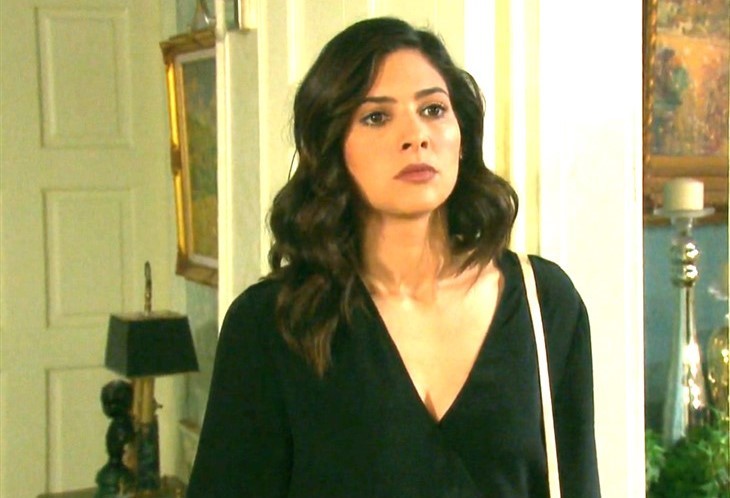 Days of Our Lives spoilers reveal that Ava Vitali (Tamara Braun) isn’t going to let Gabi Hernandez (Camila Banus) win. The beef between the two women began with Rafe Hernandez (Galen Gering). It has now evolved into a business battle. The ‘Ava Chic” bombshell horrifies Gabi, and she plans on destroying the mob princess for good.

DOOL spoilers reveal that when Ava returned to Salem, fans assumed she would once again obsess over Steve “Patch” Johnson (Stephen Nichols). The history of Ava’s fixation on Steve was played up at the very beginning. However, Ava soon showed signs of getting over her obsession. When Ava began dating Rafe, fans were still divided on the complicated villain.

It seems that Ava really did try to become a decent person. Being romantically involved with Rafe has helped Ava turn into a better woman. However, each time Ava would take two steps forward, Gabi would pop up and force the mob princess to take one step back.

In Gabi’s mind, Ava inserting herself into the Titan takeover war just proves that the mob princess has never changed. However, Gabi refuses to admit that she started this battle. If she would have just left Rafe and Ava alone, Gabi would have never made herself a target. Fast forward to the current storyline and Gabi is not the only one that is at risk. Ava is also targeting Jake and Gabi Chic.

Days of Our Lives spoilers reveal that Ava needs a job but is having trouble getting hired. Ava even approached Nicole Walker (Arianne Zucker) about working for Basic Black, as well as putting in an application to be a chef at Julie’s Place. With Ava’s history and reputation creating roadblocks, it was only a matter of time before she returned to her old ways.

Ava might have shared Gabi and Jake’s Titan takeover plan with Philip Kiriakis (Jay Kenneth Johnson). Ava might have even done it initially to warn Philip that Gabi was plotting against him. However, the minute that Philip wanted more information, Ava decided to use it to her advantage. Instead of getting a job and climbing up the ranks or even starting her own business, Ava has chosen to steal Gabi’s company.

Speaking to Soap Opera Digest, Banus explained that Gabi always suspected Ava’s redemption was fake. Gabi thinks she has confirmation of this when the mob princess brags about her new goal. That goal is to be handed Gabi Chic and to add insult to injury, the mob princess is considering changing the name of the boutique. If Gabi Chic became Ava Chic, it would be a sore reminder of what she lost every single day.

There is no way that Gabi is going to let that happen. Banus said that Gabi plans on destroying Ava. Even though Gabi is a bit of a villain and has been in prison, she is not in the same league as Ava. Is the fashionista biting off more than she can chew and what will be the consequences?