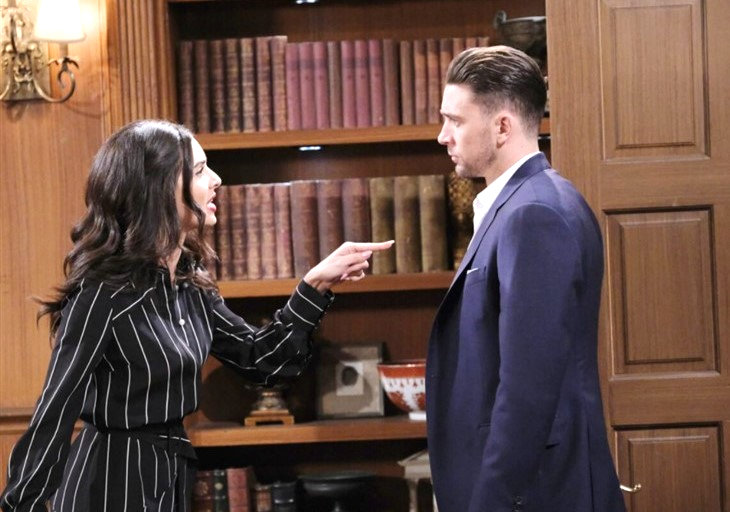 Days of Our Lives (DOOL) spoilers reveal that in Salem Li Shin (Remington Hoffman) has another big change for DiMera Enterprises. Last time, Chad DiMera (Billy Flynn) had to oversee Jake Lambert DiMera (Brandon Barash) during his probation period. Could Jake get Chad’s position? If so, he better watch out because Gabi Hernandez (Camila Banus) is back and wants to strike a deal.

Days Of Our Lives Spoilers – Li Shin Took A Chance

DOOL spoilers reveal that the last time we saw Li wasn’t that long ago. Jake called him and didn’t think it was fair that Chad got to be CEO even though he’s younger than Jake. He wanted a chance to prove himself, so Li agreed. However, Jake didn’t get exactly what he wanted. He was given the co-CEO position and he would be forced to work under Chad’s supervision and only on a trial basis. Sounds pretty similar to Titan, doesn’t it?

During the week of January 18, Li will be back and will announce another huge change for DiMera Enterprises. Considering that Chad’s one-night stand with Gwen Rizczech (Emily O’Brien) probably goes viral, that’s bad PR. No company wants that and it could cause Li to make a harsh decision. Not only will Chad lose Abigail DiMera (Marci Miller) and his children, but he could lose his job as well.

Days Of Our Lives Spoilers – Jake Lambert DiMera Gets It All

Days of Our Lives spoilers reveal that Jake just might end up getting it all. Perhaps he is doing a good job for someone who has only been a mechanic. DiMera Enterprises might need new blood and someone with fresh ideas. Someone others can relate more to and get along with. Jake is very charismatic and personable, but not in an entitled kind of way. Clients might like that.

Around the same time that Li announces his decision, Gabi pops up in Jake’s office. He is surprised, but she has a deal for him. Of course, she wants his heart, but that’s not attainable right now. So, she will do what she did with Stefan DiMera (also played by Brandon Barash) and seduce him the corporate way. However, we all know that Gabi would love to have control over DiMera Enterprises again. So, if Jake falls for the deal, could he be giving away his brand new position? To find out, we will have to keep watching the NBC soap. In the meantime, tell us what you would like to see happen with Chad, Jake, and Gabi.