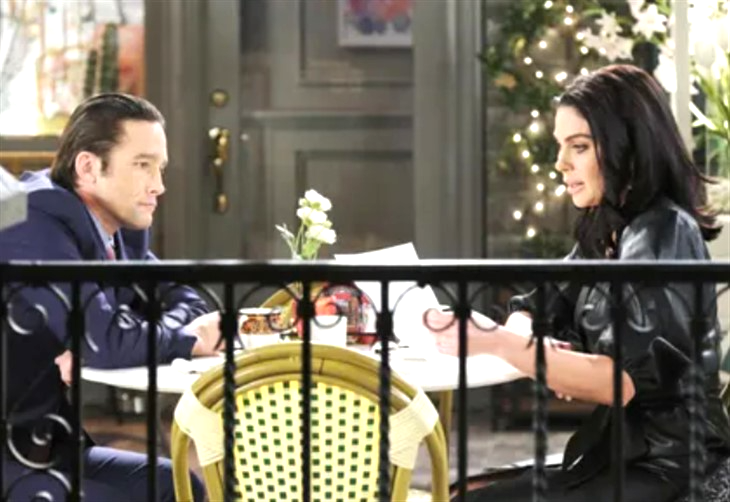 Days of Our Lives (DOOL) spoilers tease Chloe Lane may find herself in grave danger in future soap opera episode. It isn’t like she hasn’t found herself in precarious situations before. This is the same woman who found herself the object of obsession from a dangerous drug lord. He ended up having her kidnapped and trapped her in vast, but highly secure compound.

And while rescue soon arrived in the form of John Black (Drake Hogestyn), DOOL spoilers confirmed John was soon held at gunpoint and it was Chloe who didn’t hesitate to stab the man, killing him and effectively rescuing herself as well John. But now, Chloe may find herself in over her head from more than one source.

Days Of Our Lives Spoilers & Recap – Chloe Lane Has Involved Herself In Phillip Kiriakis’ Issues With The Vitale Crime Family!

Phillip Kiriakis (Jay Kenneth Johnson) is a gambling addict. His recent fling with Mimi Lockhart (Farah Fath) reintroduced him to the world of high stakes poker. It didn’t end well, and Phillip was soon deep in debt with no way to make restitution. Ava Vitale (Tamara Braun) stepped in and offered to pay off Phillip’s debt. But nothing in life is free and to pay Ava and the Vitale crime family, Ava forced Phillip to return to Salem.

To pay off his debt, he was to launder the Vitale’s mob money through his father’s company, Titan Industries. But Phillip had to deal with a Co-CEO. Phillip’s father insisted that Phillip and Xander Cook (Paul Tefler) run Titan together. Xander’s presence would make it near impossible to complete his task for Ava. So Phillip has been working overtime to get Xander out of Titan. But Chloe, who once shared a great romance with Phillip years ago, heard Phillip on the phone discussing his money laundering plans.

Chloe isn’t the type of person to just let things go, so she hounded Phillip until the admitted the whole story to her. Immediately, Chloe tried to come up with ways to get out from under the mob family. Brady Black (Eric Martsolf) saw their intense conversation and wanted to make sure Chloe was ok. And while Phillip tried to make up a lie, Chloe wasn’t having it and made Phillip tell Brady about the trouble he is in.

According to Days of Our Lives spoilers, Phillip is worried that if the Vitale’s find out that both Chloe and Brady know their plans, that they will not hesitate to eliminate either of them. And while spoilers seem to indicate Chloe does indeed go missing, it may not be the Vitale’s doing!

Brady and Chloe went to the DiMera New Year’s Eve party together, but just as friends. Brady is very much in love with Kristin DiMera (Stacy Haiduk), who is currently in prison for stabbing Victor in the chest. Having a daughter has softened Kristin’s darker impulses but she is still prone to anger and rage. Somehow, Kristin saw a picture of Brady and Chloe’s platonic NYE kiss. And while Brady explained that nothing romantic was going on, and Kristen seemed to regain her composure, she won’t like that Chloe is now working closely with Brady at Basic Black.

Days Of Our Lives Spoilers – Will A Rash Decision Made In Anger Go Too Far?

If Kristen gets it in her head that Chloe is a threat to her future with Brady, she might very make a call that she would later regret. The DiMera family has contacts everywhere and if Kristen wanted to scare or even harm Chloe, she could most likely make that happen even from prison. But one thing is for sure, Chloe may be more formidable than Kristen realizes!

DOOL Soap Opera Spoilers – What Do You think?

Will Chloe soon find herself in great danger? Could the Vitale family be trying to teach Phillip a lesson? Or could Kristen be involved? And how it all be resolved? Danger lurks everywhere in Salem, so stay tuned to Days of Our Lives, airing weekdays on NBC. And don’t forget to check back right here regularly for all your Days of Our Lives news, information and two weeks ahead spoilers!