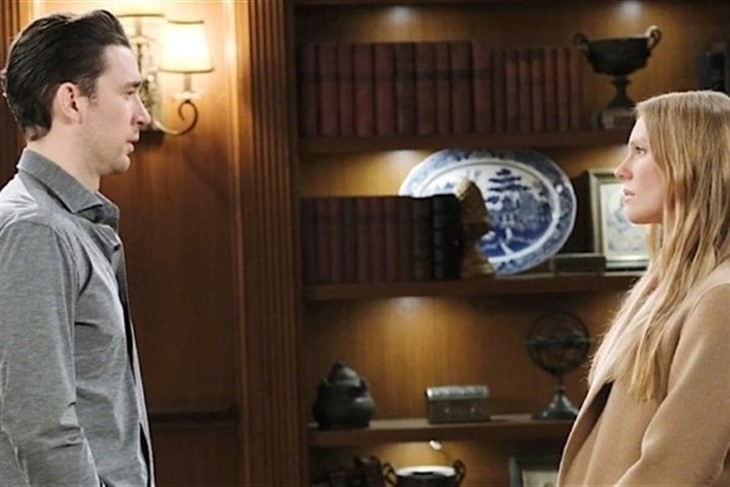 Days of Our Lives (DOOL) spoilers tease that in Salem Chad DiMera (Billy Flynn) will warn Abigail DiMera (Marci Miller) that her anger against Gwen Rizchech (Emily O’Brien) has gotten out of hand, and her vendetta has gone too far, in an upcoming episode of Days of Our Lives!

Days of Our Lives viewers will remember Chad was suspicious when he saw Abigail and Gabi Hernandez (Camila Banus) together in the first place. Longtime Days of Our Lives viewers will remember that Abigail and Gabi were close friends at one time, but then became frenemies and even enemies because of a series of situations over the years. The most glaring evidence of Gabi’s hatred for Abigail came when she tampered with the paternity test of Charlotte DiMera (Olivia and Oakley Rondou).

She hacked into a computer at Salem University Hospital, and altered the results to read that Stefan DiMera (Brandon Barash) was the father instead of Chad! However, she had kept a real version in her bedroom at the Kiriakis mansion, and Julie Williams (Susan Seaforth Hayes) had helped Abigail by finding it and confronting Gabi – however, she lost her balance and fell down a flight of stairs! Still, Julie did recover and the truth did come out! After that, Chad, Abby and the children moved to Paris, France for a while where Chad ran the Paris office of DiMera Enterprises before returning to Salem a few months ago. So, Chad was immediately suspicious when he saw the two of them together! Then, Gwen emerged from the tunnels, having freed herself from her bonds shortly after Abigail came out!

Chad himself doesn’t trust Gwen as far as he could throw her, but he confronts Abigail and says her vendetta and her anger has gotten out of hand. Abigail retorts that she was trying to coerce a confession out of Gwen for killing Laura, which is something they argued about before. Chad recounts that argument, and repeats his suspicions that Abigail doesn’t want to go to marriage counseling with him because of her anger towards Gwen, which he says is out of hand.

He recounts to her that big fight at the cemetery as well, when he and others had to literally tear Abigail off of Gwen, when she had merely been there to pay her respects. Abigail starts the same argument, that she knows that Gwen killed Laura, and Chad again reminds her there was no forensic proof, and no witnesses. The coroner’s report agreed with a blow to the head against the corner of a table, from a fall is what killed her. Abigail again flies into a rage, and tells Chad she is certain that Gwen pushed her!

The two continue to argue, but then he says it’s enough; it’s just the same old argument over and over. He tells her that her anger has driven her insane, and threatens to put her back into treatment at a mental health facility – how does he know she might not kill Gwen the next time? Chad considers a judicial commitment a much better alternative than Abigail going to jail for murder!

The Bold And The Beautiful (B&B) Spoilers: Hope Shares Life Changing News With Liam, But Will He Believe Her?