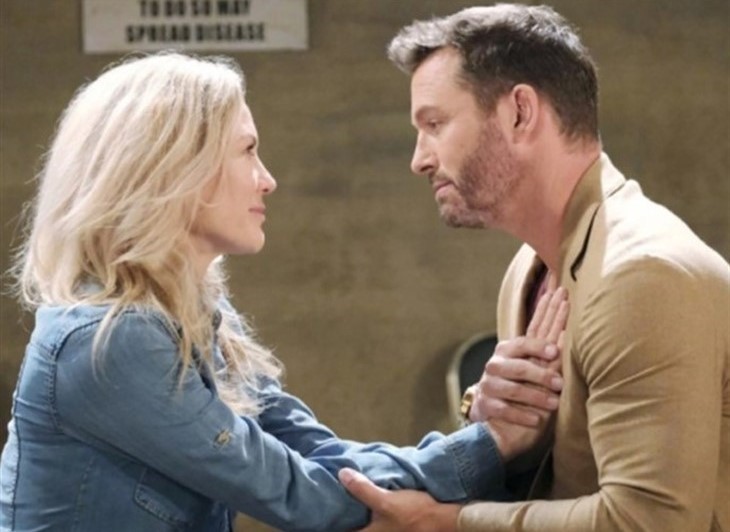 Days of Our Lives (DOOL) spoilers reveal that in Salem Brady Black (Eric Martsolf) and Kristen DiMera (Stacy Haiduk) have a child together, but that doesn’t mean they are meant to be. In fact, after Kristen flips out over the New Year’s Eve kiss, Chloe Lane (Nadia Bjorlin) reasons with her friend. She tells Brady that his relationship won’t last. Is she right and could Brady decide to walk away?

DOOL spoilers reveal that even though Kristen is serving a five-year prison sentence, Brady is determined to stay faithful. He visits her regularly and tries to make her time behind bars a little more bearable. However, five years is a long time and there are still questions of if they are even meant to be together. Yes, Kristen is somewhat redeemed, but all it will take is one misunderstanding or someone crossing her and she’ll be back to her evil ways.

In fact, Kristen sees a picture of Brady and Chloe kissing in the newspaper. It was a platonic kiss for New Year’s. However, that won’t stop Kristen from exploding and she shoves the newspaper in Brady’s face when he visits her next. She will demand answers, but won’t’ stop talking long enough to hear the answer. There is a chance that Kristen will understand his explanation, but it’s even more likely that she’ll assume Chloe’s moving in on her man.

It is teased that Kristen will become fixated on Chloe and it was assumed it was because of the kiss. But what if it has to do with something else?

Days Of Our Lives Spoilers – An Honest Conversation

Days of Our Lives spoilers reveal that Chloe will have an honest conversation with Brady. She doesn’t think the relationship can survive, especially with how Kristen reacted to the New Year’s Eve kiss. She suggests that it might be time for Brady to really think about his future and be honest with himself about whether Kristen is in it.

Chloe has a right to be concerned. Kristen completely exploded over a picture in the paper. In fact, she explodes at nearly everything and that’s a toxic environment for anyone to be in. After all this time, Kristen still hasn’t learned to ask questions and get the facts first, then react… not the other way around. In fact, that’s why she’s in prison right now!

If Brady breaks up with Kristen after her latest blow-up, could that be why she becomes fixated on Chloe? We already know Kristen won’t take responsibility for her own actions. In her mind, Brady leaving her has to be someone else’s fault. She will put that blame on Chloe and put a plan in place to make the opera singer pay. With the actress being put back on contract, it’s reasonable to assume Kristen will soon be released. That means Chloe better watch her back.