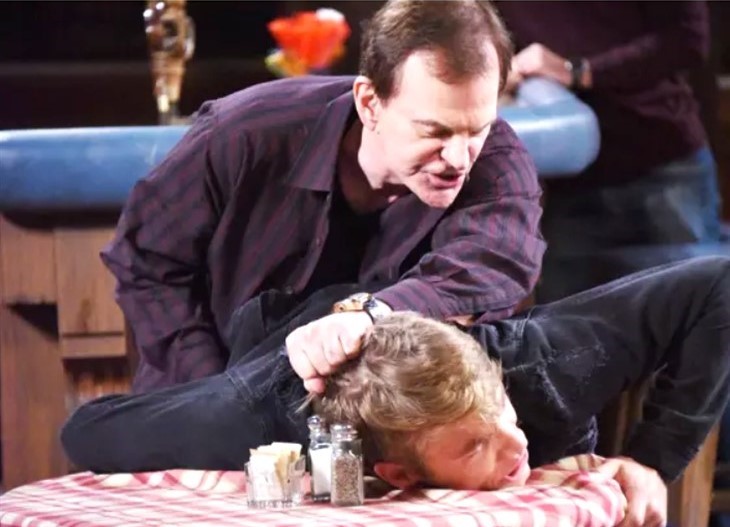 Days of Our Lives spoilers for the week of January 4 reveal that it begins with Tripp Dalton (Lucas Adams) still not being cleared. He will get blasted by Roman Brady (Josh Taylor), who thinks he raped Allie Horton (Lindsay Arnold). But towards the end of the week, the truth will come out. Kayla Brady (Mary Beth Evans) reacts to the secret brother bombshell.

Days Of Our Lives Spoilers – Roman Brady Lashes Out

DOOL spoilers reveal that Tripp has been getting heat from pretty much everyone in Salem. Allie pointed the finger and said that Tripp is the person who raped her. Tripp thought the DNA test would clear him, but it actually did the opposite. Roman is the next person who is going to get in Tripp’s face, which he will regret just a few days later.

While Roman is bashing Tripp, Steve “Patch” Johnson (Stephen Nichols) and John Black (Drake Hogestyn) uncover a big clue. It will eventually lead them to make a startling discovery. Steve and John will continue to investigate and end up uncovering the truth!

Meanwhile, Allie is doing her part by having Marlena Evans (Diedre Hall) hypnotize her. The session does lead to her remembering important details from the night of her rape. That’s when everyone realizes that Claire Brady (Isabel Durant) is nowhere to be found and a desperate search gets underway.

Days Of Our Lives Spoilers – Kayla Brady Reacts To Bombshell

Days of Our Lives spoilers reveal that Kayla will learn that Tripp was telling the truth this entire time. She will also be shocked to find out that Steve’s theory was actually correct. She will be blown away to learn that Ava had another son, which is why the DNA test made Tripp look guilty.

During the week of January 4, the truth will be out about Charlie. Claire finds out just in time because she is about 2 minutes from becoming intimate with Charlie when Ben Weston (Robert Scott Wilson) interrupts and drags her away. However, that won’t be the end of Charlie. He will remain a threat in Salem because the police can’t arrest him for anything.

So, he spends his time drugging Ava Vitali (Tamara Braun) and threatening to put her in the psychiatric hospital. Nicole Walker Brady (Arianne Zucker) learns that Charlie is still threatening Ava in 2021. She thinks Ava is at risk and Charlie could make good on his threats, so she begs Rafe Hernandez (Galen Gering) to put Ava in protective custody. However, Rafe doesn’t want to get involved and hesitates to do anything, claiming it’s too early for that kind of intervention. However, by the time he takes action, could it be too late?

The Bold And The Beautiful (B&B) Spoilers: Zende And Paris Share A Passionate Moment Together