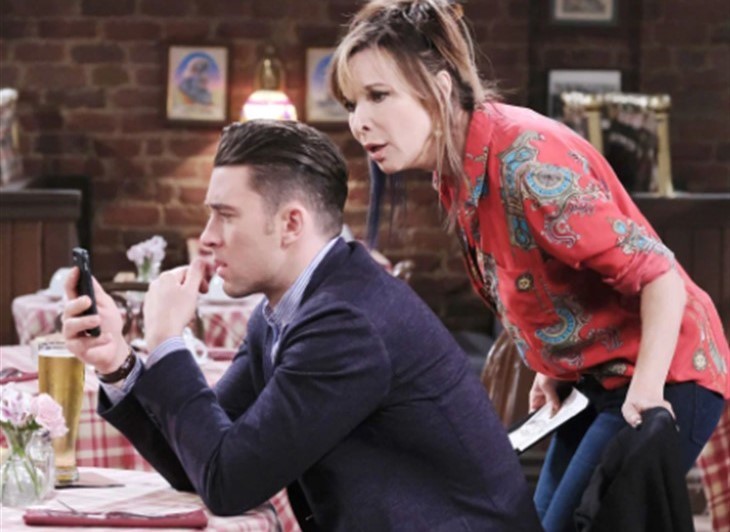 Days of Our Lives spoilers reveal that after in Salem sleeping with Gwen Rizczech (Emily O’Brien), Chad DiMera (Billy Flynn) goes home. He finds Jake Lambert DiMera (Brandon Barash) and Abigail DiMera (Marci Miller) together. He immediately starts going into a crazed verbal tirade, but then finds out that the only cheater is him. He reacts with horror when finding out Jake’s real lover.

DOOL spoilers reveal that Chad starts ranting like a lunatic at Jake and Abigail. He’s spouting off about them having an affair the morning after sleeping with Gwen. Suddenly, Abigail stops her husband and shares some information. She lets him know that Jake is not sleeping with her, the woman he’s getting freaky with is none other than Kate Roberts DiMera (Lauren Koslow). That stops his temper tantrum right in its tracks.

When the dust settles and the information sinks into Chad’s head, then he has a hilarious reaction. He ends up having a horrified and disgusted look on his face, which isn’t an insult toward the character. It’s that Kate is like a mother to Chad. So now he is picturing her in bed with his brother.

Days of Our Lives spoilers reveal that the drama really starts to set in after Jake and Kate’s secret is out. Gwen admits to lying about Jake and Abigail, which has Chad once again reacting with shock. When Abigail hears this, she is furious and fires Gwen on the spot.

However, she manages to stay in the DiMera mansion. Since Chad hasn’t told Abigail what he was really doing the night before, she has no idea about the betrayal. Gwen uses this to her advantage. When alone with Chad, she tells him that Abigail will hear all the details about last night unless he allows her to stay.

Chad is disgusted by the whole thing, but he’s mostly angry with himself. He should have trusted his wife and believed what she was saying. Instead, he allowed himself to be manipulated by a woman he barely knows. Now he has cheated on his wife, is lying and keeping secrets from her, as well as being blackmailed by the ex-nanny.

Things are only going to get more explosive, too. Not only does Gwen have a bombshell to drop later on, but it’s going to enrage everyone. Gwen will feel Jack Deveraux’s (Matthew Ashford) wrath and Abigail will angrily confront the schemer. Then, things get even more intense when Gabi Hernandez (Camila Banus) returns! Not only is that the last person Chad and Abigail want to see, Gabi vows not to give up until Jake is hers. It’s going to be quite the beginning to 2021, that’s for sure!